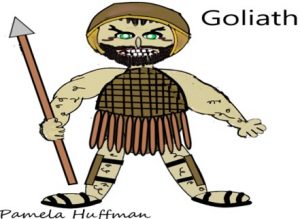 Before you begin this Bible study, If you have never believed in Jesus Christ as your Savior, John 3:16 tells us, “For God so loved the world, that He gave His only begotten Son, that whosoever believes in Him, shall not perish, but have eternal life.” Simply have faith that Jesus Christ died on the cross for your sins and you will have eternal life and be saved. If you have believed in Jesus Christ as your Savior, then 1 John 1:9 tells us, “If you confess your sins, He is faithful and righteous to forgive us our sins and to cleanse us from all unrighteousness.” Simply privately tell God the Father your sins to be filled with God the Holy Spirit and He will teach you Bible truth (Rebound).

“And that all this assembly may know that the Lord does not deliver by sword or by spear; for the battle is the Lord’s and He will give you into our hands.”

One day Gracie was at her friend Jason’s house. They were playing inside of an old broken down school bus. After they were done, she spotted a ladder leaning up against Jason’s house.

Instantly, she started climbing it. Up, up, up she went. When she got to the very top of the ladder, her legs started wobbling. Gracie fell 2 stories, hitting her head on the cement sidewalk below.

Jason got really scared when Gracie didn’t open up her eyes and ran next door to get her mom. When Gracie woke up, she tried to stand up, but she felt really dizzy and vomited all over the grass. Gracie and her mom went to the hospital. The doctor told them that Gracie had a really bad concussion and that she had to stay in the hospital for 3 days.

Gracie’s mom wasn’t allowed to stay with her because of Covid-19 rules. Gracie cried and cried. She was afraid of all of the beeping noises and she hated needles. It was super scary at night without her mom there. She felt so lonely and needed a hug. All of us get lonely and afraid at times. Did you know that remembering Bible lessons can help you when you get scared?

A long time ago in Israel, there was a young shepherd by the name of David. He lived in Bethlehem with his father Jesse and 7 older brothers. Most shepherds carried a club, a staff, and a slingshot.

Can you imagine him being outside in the dark and sleeping under the stars? I wonder if David got scared when he heard noises from different animals. We know for sure that there were a couple of times that he heard a lion’s roar and a bear’s growl. 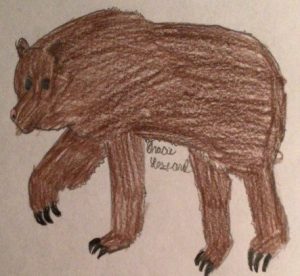 It was David’s job to keep the sheep safe. He wasn’t about to let a lion or a bear eat any of the sheep. David trusted God to help him. In fact, God helped him to kill both the lion and the bear.

David’s 3 oldest brothers were soldiers in the army led by King Saul.  One day, his father Jesse asked him to take some food to his brothers and their commander. Once he got there, he heard a big, loud-mouthed giant threatening the armies of God. His name was Goliath. He was a part of the Philistine army that was against Israel.

Goliath was 9 feet 9 inches tall and he wore a bronze helmet, armor, and carried a giant spear. He was not only tall, but had a big mouth as well. Twice a day for 40 days and nights, he shouted at the Israel army.

He wanted them to pick one soldier to fight him. If that one man lost, then the Philistine army would win. Goliath thought he could win the battle all by himself. King Saul and all of the soldiers were scared to death of him. When David heard him, he decided that he would be the one to fight him because He trusted God to help him.

King Saul didn’t want to send David out there because he wasn’t even in the army and had no experience as a soldier. David told him that he killed a lion and a bear while taking care of the sheep. King Saul agreed to let David go up against that mean, old giant. 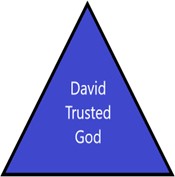 David went to the battle in the name of the Lord. He knew that God would deliver him. In fact, God had promised that David would end up being the king of Israel. David trusted that God would keep His promise to him.

Goliath was in total shock when he saw young David. How could this little bitty guy win! The only weapon David had was a slingshot and 5 stones. The giant tried shouting out threats to David, but David didn’t get scared. He shouted back at Goliath that the battle was the Lord’s. Then he ran towards him and took one stone out of his bag and slung it at him with his slingshot. It struck Goliath on the forehead and he fell face first onto the ground. Then, David took Goliath’s sword and cut off his head. The rest of the soldiers of Israel ran after the other Philistines and killed them. Praise God for coming through! They didn’t have to be afraid because the battle was the Lord’s.

When you are scared, tell God that you are afraid.

Remember our Bible lesson about David and Goliath. David wasn’t afraid because he trusted God to help him.

Remember if God can help David kill a giant, then He can help you.

Relax while God takes care of it.