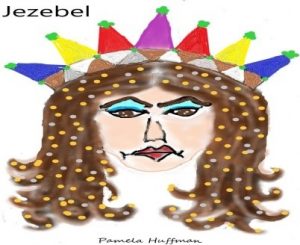 Before you begin this Bible study, if you have never believed in Jesus Christ as your Savior, John 3:16 tells us: “For God so loved the world, that He gave His only begotten Son, that whosoever believes in Him, shall not perish, but have eternal life.” Simply have faith that Jesus Christ died on the cross for your sins and you will have eternal life and be saved.

If you have believed in Jesus Christ as your Savior, then 1 John 1:9 tells us: “If you confess your sins, He is faithful and righteous to forgive us our sins and to cleanse us from all unrighteousness.” Simply privately tell God the Father your sins to be filled with God the Holy Spirit and He will teach you Bible truth (Rebound).

“Do not fear, for I am with you; do not anxiously look about you, for I am your God. I will strengthen you; surely I will help you.”

During the Age of Israel, Ahab was the king of Israel. He married an evil woman named Jezebel. Both of them worshipped a false god named Baal.

Lots of people thought if they worshipped Baal, that he would send them lots of children, and good weather to grow their crops. But guess what, they were totally wrong. Baal was just a hunk of stone.

God decided to teach King Ahab a lesson. He sent the prophet Elijah to warn the evil ruler that there wouldn’t be any rain for a long time in Israel. God was punishing them for treating a fake god like he was real.

King Ahab searched everywhere for Elijah during the 3 years of the drought. But guess what, he didn’t find him. He stubbornly thought that it was Elijah’s fault that it didn’t rain. God hid Elijah and kept him safe for over 3 years.

During part of that time, God sent ravens to bring him meat and bread  twice a day he had plenty of water to drink. During the rest of the time, Elijah stayed with a widow and her son.

Can you imagine what would happen if it didn’t rain for over 3 years? The rivers would dry up, and we wouldn’t smell the greatest because we wouldn’t be able to bathe. Corn, wheat, and other crops would all wilt and die. The livestock would die too. So, there wouldn’t be any cheeseburgers, apples, mashed potatoes, fried chicken or bread to eat.

One day, God decided to end the drought. He told Elijah to go talk with King Ahab. Elijah trusted God and he did what God told him to do. Baal and God were supposed to have a contest to make fire without a lighter, flint, or any wood. Telling Baal to start a fire would be like telling a pile of rocks, to make an ice cream cone.

The false prophets of Baal cut up an ox and placed it on an altar. They begged and pleaded with Baal all day long to send fire. Nothing happened because idols aren’t real.  Elijah had a bit of fun with them and asked them if the idol was asleep or on vacation.

Now it was Elijah’s turn. He cut up an ox and made an altar to worship God. He had someone pour 12 pitchers of water all over it. When it  was completely drenched, Elijah prayed to God. Instantly, God sent a roaring fire that burned up the ox, the altar, and even the water! When the people of Israel saw that, they shouted, “The Lord He is God!”

Next, Elijah killed the false prophets to keep them from lying to everyone about idol Baal. Elijah prayed for rain, and God sent rain. King Ahab told his wicked, evil wife Jezebel everything that happened. She was furious and sent Elijah a message that he would be killed in 24 hours!

Elijah ran away because he was afraid of Jezebel. She was an evil bully, and she had murdered lots of other people. He forgot everything that God had done for him. Eventually, Elijah trusted God again, and God kept him safe.

At times, all of us get scared just like Elijah did. Some of you might get scared and run away when you see a snake or an alligator. God wants you to tell Him when you are worried and afraid. That way, you will be in fellowship with God.

Remember, God helped Elijah all of the time. He sent ravens to feed him bread and meat twice a day during the drought. He protected Elijah from Jezebel.

Remember if God can help Elijah, He can help you too.

Relax while God takes care of it.