Before you begin this Bible study, if you have never believed in Jesus Christ as your Savior, John 3:16 tells us: “For God so loved the world, that He gave His only begotten Son, that whosoever believes in Him, shall not perish, but have eternal life.” Simply have faith that Jesus Christ died on the cross for your sins and you will have eternal life and be saved. If you have believed in Jesus Christ as your Savior, then 1 John 1:9 tells us: “If you confess your sins, He is faithful and righteous to forgive us our sins and to cleanse us from all unrighteousness.” Simply privately tell God the Father your sins to be filled with God the Holy Spirit and He will teach you Bible truth (rebound).

“Indeed, the very hairs of your head are all numbered. Do not fear; you are more valuable than many sparrows.  Luke 12:7

One day, Carlene had received the scary news that her medication caused her to go into kidney failure. Carlene and her husband, Ben were both in shock when they heard this news! Her doctor told her to go to a hospital in Chicago.

The 2 hour drive to Chicago was like driving their car on a wacky race track! They felt like they were taking their life in their own hands when fast cars zipped and zagged all around them, then slammed on their brakes as traffic came to a stop. Both of them were afraid that they would be in an accident at any moment.

When they got to the hospital, they talked to a whole team of doctors, nurses, and surgeons. Carlene and her husband Ben were both afraid when they heard that she had to have a kidney transplant. Carlene was full of love for her husband, Ben when he volunteered to give her one of his kidneys.

At first, Carlene wondered why God allowed this to happen to her, but then she remembered that even though this was going to be a tough challenge, that God would help her every step of the way. She even remembered that not to be afraid because if God knew how many hairs were on her head, then He would take good care of her.

In our Bible story about Gideon, we are going to find out that he was in shock and afraid over what God wanted him to do, just like Carlene. 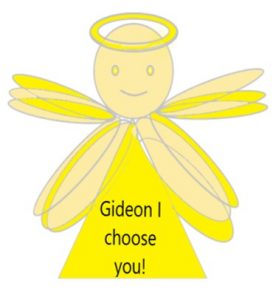 Something terrible was happening in Israel. Their enemies, the Midianites, were stealing their food and their animals. Can you guess why? It’s because they quit trusting God and started thinking that fake gods, called an idols, would help to grow lots of food and have lots of kids. Fake gods can’t think, love, or help anyone; they are just chunks of stone or wood.

After seven years of never having enough to eat, the Israelites finally remembered to ask God for help. A young man named Gideon was in afraid and in total shock when the angel of the Lord asked him to be in charge of the army. In fact, he thought God had made a huge mistake.

God knew Gideon would end up a brave warrior; just like He knows

how many hairs that each one of us has on our heads. Gideon’s first job was to chop down and knock over the idols. It was pretty scary, but He did what God told him to do.

Gideon still didn’t think that God could use him to rescue Israel. So, he came up with a strange idea. He put some fleece outside, and when he checked it in the morning, God had done a miracle the fleece was wet and the ground was dry. Still, Gideon was unsure, and again put out the fleece. This time, God kept the fleece dry and the ground was wet. Gideon finally came to his senses and believed God.

Lots of starving Israelites decided to fight with Gideon. God told Gideon that there were way too many people. Gideon told them if they were afraid, that they didn’t have to fight, so twenty thousand of them walked away. That left ten thousand soldiers!

God told Gideon that there were still way too many volunteers. Gideon told them to go down to the water for a drink. Three hundred guys were chosen because they scooped up the water in their hands, and the rest were sent home.

Gideon didn’t give the men swords or guns. Instead, he gave each of the men a trumpet and a torch that they hid inside of empty pitchers. Gideon divided them up into three groups. God wanted everyone to know that they could trust that He would give them the victory.

Gideon and his little bitty army surrounded their enemies and blew their trumpets and smashed the pitchers so their torches were blazing. They yelled, “A sword for the Lord and for Gideon!”

After that, Gideon and his soldiers just stood there and watched. The huge armies of Midianites below were totally confused, and terrified that they didn’t know who was on their side and who the enemy was so they stated killing each other with their swords and running away.

God used Gideon to save Israel! God has important jobs for you too, just like He gave to Gideon. So, remember that when you get scared, to tell God right away and think of reasons to trust God.

Remember, if God can keep Gideon and his tiny army safe during a battle, then He can keep you safe from whatever you are afraid of.

Remember, if He keeps a little bitty sparrow safe when there is a storm, He will keep you safe too.

Relax. Be like Gideon and his army; they just stood in place while God did the rest.