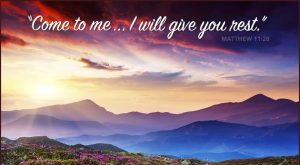 On the surface, the story follows a man named Christian as he leaves the City of Destruction and journeys to a place called the Celestial City. On his way, he encounters all sorts of roadblocks and fearsome creatures. But on a deeper level, “The Pilgrim’s Progress” charts the journey of an average Christian person striving to leave behind destructive, sinful ways and go to Heaven. It isn’t until Pilgrim comes to know Jesus Christ that he is freed from the heavy burden he carries because of his lack of a relationship with God. The rest of the story describes the progress in his Christian life.

The analogy of a heavy burden on your back is a good description of what life is like apart from Jesus Christ. Even for the Christian, it can feel like the weight of the world is on your shoulders when you’re not walking with The Lord as you should – or when you’re striving to do things in your own power.

In this study, we’re going to be looking at MATT 11:25-30 and The Lord Jesus Christ’s Offer of Rest to those who are burdened. This is one of those sections of Scripture that is loved by all because of Our Savior’s obvious Love which is demonstrated by His Offer. But before we can understand His Offer of Rest, we must understand its setting.

At that time Jesus said, “I praise you, Father. You are Lord of heaven and earth. You have hidden these things from wise and educated people. But you have shown them to little children. Yes, Father. This is what you wanted to do.  My Father has given all things to me. The Father is the only one who knows the Son. And the only ones who know the Father are the Son and those to whom the Son chooses to make him known. Come to me, all you who are tired and are carrying heavy loads. I will give you rest. Become my servants and learn from me. I am gentle and free of pride. You will find rest for your souls. Serving me is easy, and my load is light.” (MATT 11:25-30 New International Reader’s Version)

The Lord Jesus Christ was ministering in the region of Galilee with these verses. MATT 11:2-6 (New International Reader’s Version) fills us in on what was happening at the time: John the Baptist was in prison. When he heard about the actions of the Messiah, he sent his disciples to him. They asked Jesus, “Are you the one who is supposed to come? Or should we look for someone else?” Jesus replied, “Go back to John. Report to him what you hear and see. Blind people receive sight. Disabled people walk. Those who have skin diseases are made ‘clean.’ Deaf people hear. Those who are dead are raised to life. And the good news is preached to those who are poor. Blessed is anyone who does not give up their faith because of me.”

The Lord Jesus Christ then gave a wonderful tribute to John the Baptist: When John’s disciples left to report, Jesus started talking to the crowd about John. “What did you expect when you went out to see him in the wild? A weekend camper? Hardly. What then? A sheik in silk pajamas? Not in the wilderness, not by a long shot. What then? A prophet? That’s right, a prophet! Probably the best prophet you’ll ever hear. He is the prophet that Malachi announced when he wrote, ‘I’m sending my prophet ahead of you, to make the road smooth for you.’ Let me tell you what’s going on here: No one in history surpasses John the Baptizer; but in the kingdom he prepared you for, the lowliest person is ahead of him. For a long time now people have tried to force themselves into God’s kingdom. But if you read the books of the Prophets and God’s Law closely, you will see them culminate in John, teaming up with him in preparing the way for the Messiah of the kingdom. Looked at in this way, John is the ‘Elijah’ you’ve all been expecting to arrive and introduce the Messiah.” (MATT 11:7-14 The Message Bible)

The Lord Jesus Christ then turned His Attention to those who were critics of John The Baptist and Himself in MATT 11:16-19 (The Message Bible): “How can I account for this generation? The people have been like spoiled children whining to their parents, ‘We wanted to skip rope, and you were always too tired; we wanted to talk, but you were always too busy.’ John came fasting and they called him crazy. I came feasting and they called me a boozer, a friend of the misfits. Opinion polls don’t count for much, do they? The proof of the pudding is in the eating.” This sounds so much like today’s generation, doesn’t it? That proves an important point which is that people are the same in every generation! At this time in history, the critics were saying that John the Baptist was demonized because of his austere manner of living while at the same time they were accusing Jesus Christ of being a glutton and drunkard because He ate and drank what everyone else did.

Are you familiar with the word ascetic?  It means having only what is needed; very simple or plain. So, John the Baptist was too ascetic for them and The Lord Jesus Christ was not ascetic enough. They also criticized Jesus for being a friend of tax-gatherers and sinners because they did not believe a man who was truly holy would associate with such people. They were blind to the fact that their prideful self-righteousness was a greater stench in God’s Nostrils than the sinfulness of the publicans and harlots.

The Lord Jesus Christ said that they were childish like the kids in the market place who would not play the game the other children were playing even when they switched games. Nothing would satisfy them. These critics claimed to be the ones with wisdom, but wisdom is verified by its works, and their works proved them to be foolish.

Starting in MATT 11:20, Jesus Christ begins a very strong reprimand against the cities of Chorazin, Bethsaida and Capernaum because of their apathetic response to all that He had done in those cities. Most of His Miracles had been done in those cities, yet the people there did not repent. His words are stern and forceful. They would be judged harshly because they had rejected the tremendous amount of grace that had been extended to them. The Lord Jesus Christ’s Denunciation of those people who were critical of Him (and those that ignored Him) is the setting, but He then quickly changes to the opposite tone in presenting a wonderful and gracious offer. The offer begins with a prayer found in MATT 11:25-27 (New International Reader’s Version) in which we find the prerequisites to receiving His offer: At that time Jesus said, “I praise you, Father. You are Lord of heaven and earth. You have hidden these things from wise and educated people. But you have shown them to little children. Yes, Father. This is what you wanted to do. “My Father has given all things to me. The Father is the only one who knows the Son. And the only ones who know the Father are the Son and those to whom the Son chooses to make him known.”

Jesus begins His prayer, “I praise You, Father.” This very important opening statement teaches us two things. First, we should begin praying with praise. Second, Jesus is The Son of God. The tendency for most people when they pray is to jump right into petitions. People usually start or very quickly move into asking God for what they want and often forget to praise Him. The reality is that praise is the proper beginning of prayer for, as Jesus points out in the next phrase, God is “Lord of heaven and earth.” God is The Creator and Master and so is worthy of our praise. God is not a cosmic vending machine whose purpose is to satisfy man’s desires. Too often people go to God as if He exists for their purposes when the reality is that God created man for His purposes.

The word translated in MATT 11:25-27 as praise gives emphasis to the importance of praise as part of prayer. The Greek word Matthew used is exomoloe which is not one of the more common words for praise but is the one used in the Septuagint in the Psalms of Thanksgiving and praise and so reflects them. It is a compound word that has a basic meaning of “to agree with” or “to say the same thing” and came to be used to express praise to God for what He has done. In this passage, we get the sense of Jesus Christ’s Praise of His Father rising out of His Agreement and Unity to what the Father has done. The same thing becomes increasingly true in your own life as you become more like Christ because you have a greater understanding and agreement with what God has done and is doing in your life.