Teen Tree of Life. The Doctrine of Humility. Part 2. 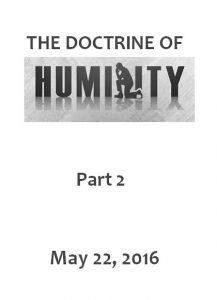 We are studying the Doctrine of Humility. As we learned last week, the word humility is defined as the quality or state of not thinking you are better than other people. It’s pretty simple when you think of it: humility is lacking arrogance.

1PE 5:5 commands us to clothe (fasten) ourselves with humility: …and all of you, clothe yourselves with humility toward one another, for God is opposed to the proud [arrogant], but gives grace to the humble. And why does God Command this? The reason is God can only give blessing and deal graciously with those who have true humility. This is because if you’re humble, you have capacity for grace and blessings. With humility, achievement belongs to God and happiness belongs to the believer, but only when the believer functions in the Plan of God.

It is safe to say then that the believer experiences happiness comparative to his function in the Plan of God. That is to say that the more you are in His Plan, the more happiness you will experience. The arrogant believer attempts to achieve things by his own ability, according to his own rules. The humble believer waits for God to pave the way in His time even though his or her present circumstances may not make sense. Christian service performed in the cosmic system glorifies SELF, while the same Christian service performed in the Power Sphere of God's Plan glorifies GOD. The issue then, is not what you do but which Power Sphere you reside and function in.

The cosmic system can offer power (human power) and it can offer things which you think you want; but God's Plan goes far beyond what you can even dream of. The humility and peace which accompany the Blessings of God are something the world can never offer. As a result of living in predestination and being humble, the things you do mean a great deal more. Humility orients everything in life to the Grace of God while arrogance orients everything in life to the promotion of self and Satan.

For the unbeliever, humility is developed from adherence to the laws of Divine Establishment. God has ordained these laws for the survival and freedom of the human race during the course of human history.  Anarchy exists when segments of nations ignore these laws.  The laws of Divine Establishment provide the freedom to fulfill the Divine Plan as ordained in the Divine Decrees under many types of government.

So, then, the unbeliever can develop virtue as his protection in the devil's world but this is not enough for the believer in Christ. If the laws of Divine Establishment can be kept by anyone – believers and unbelievers alike – then humility for believers entails more. Humility from physical birth is developed through a system of authority based on the laws of Divine Establishment, but humility from one's spiritual birth (belief in the Lord Jesus Christ) thereafter is based on the learning the Mystery Doctrine of the Church-Age under the tutelage of a man  with the spiritual gift of pastor-teacher. The word "mystery" refers to the doctrine of the Great Power Experiment for the Church-Age that was introduced by the Lord in the upper-room discourse and is completely revealed in the New Testament epistles. It is called the mystery because it was never revealed in Old Testament times but now has been manifested to the Church. … that is, the mystery which has been hidden from the past ages and generations, but has now been manifested to His saints… (COL 1:26).

Humility is not a natural quality of man, so, it must be attained through learning under a legitimate system of authority. So, it is important for both believer and unbeliever to identify what true authority in life is and then submit to that authority. Rejection of authority is a sign of the believer being under demon influence: Yet in the same way these men, also by dreaming, defile the flesh, and reject authority, and revile angelic majesties. (JUD 1:8)

The arrogant learn just as the humble learn, but the arrogant learn from the system which disorients them to life:  For certain persons have crept in unnoticed, those who were long beforehand marked out for this condemnation, ungodly persons who turn the grace of our God into licentiousness [immorality] and deny our only Master and Lord, Jesus Christ. (JUD 1:4)

God has provided a mechanical system of humility for every normal person of the human race. No one is born with genuine humility. Humility is a virtue which must be acquired/developed. And the first system of teaching humility is the authority in the home. This is not to say that every home offers the ideal circumstances of authority; authority can be administered in right or wrong and just or unjust circumstances. God has made it possible in homes with unfair authority for acceleration of virtue or acceleration of evil. It can go either way, depending on a person’s own volition. There are times when the child learns the concept of virtue faster from bad and unjust authority than from fair authority. God knows what will be the most effective situation for each of us and handles things accordingly. But remember, this doesn’t mean He interferes with our choices. He merely puts us in situations which provide opportunities to make the right choices. God does not create the unfair and unjust authority but in accordance with free will, He allows it and uses it to His glory. Environment in the home is not the issue; it's the authority in the home that is to be respected. Degeneration in a society begins with malfunction of authority in the home. Rejection of authority is promoted by the god of this world, Satan, in order to produce human viewpoint thinking rather than Divine Viewpoint thinking.