Teen Tree Of Life – Commands Regarding Attitude, Actions, and Living In The Spirit – Part 4 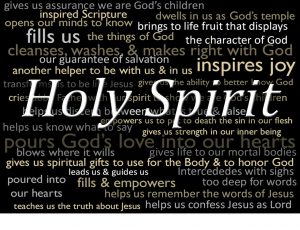 Commands Regarding Attitude, Actions and Living in The Spirit

Always be joyful. Never stop praying. Give thanks no matter what happens. God wants you to thank him because you believe in Christ Jesus. Don’t try to stop what the Holy Spirit is doing. Don’t treat prophecies as if they weren’t important. But test all prophecies. Hold on to what is good. Say no to every kind of evil. (1 THESS 5:16-22 New International Reader’s Version) In this last part of 1 Thessalonians, the apostle Paul shares a series of succinct encouragements and commands to the believers of the church in Thessalonica about how to excel even more in their walk with The Lord and in their love for one another. He addresses topics specific to both church life and personal life.

The next command we’re going to look at is related to The Holy Spirit. It has to do with prophecy which is one of the gifts that He gave to believers. Prophecy is declaration inspired by God. It can encompass stating the actions and purposes of God and can include reproving and admonishing the wicked, along with comforting the afflicted. It can also be a revelation of hidden things concerning either the present or the future.

Even though history is the record of man's thoughts, decisions, actions, and motivations, it is Jesus Christ who controls history. The Church-Age (in which we live) is the first dispensation in which there is no prophecy except the prophecy of its’ own ending time, at the Rapture of the church.

As a reminder, The Angelic Conflict is the result of prehistoric creatures (angels) being in opposition to God. It began with the fall of Satan with all angelic creatures having to decide to be with God or with Satan. Satan decided he wanted to be like God, and he convinced one third of all the angels to go along with him. These fallen angels are also known as demons. The Angelic Conflict refers to the two trials of Satan and the angels that followed him. One trial took place in prehistoric times when Satan committed the first sin in the universe – Arrogance.

The revelation of prophecy in general throughout Scripture serves as evidence that The Word of God is accurate and was written by authors which were inspired by The Holy Spirit. This allows the prophecies that have been fulfilled to give credit of the future prophecies that are to be fulfilled.

Prophecy includes both forthtelling and foretelling. Forthtelling speaks of past and present happenings. Foretelling speaks of the future. So, prophecy is a declaration of what God has already said; or it’s a new revelation from Him. At the time of 1 Thessalonians, those giving prophecy could be involved in any of these types of prophecy. Normal preaching and teaching involve declaring what God had already said. An example of that is simply proclaiming the gospel message. Since the canon was not yet closed, there could also be new revelation from God concerning directions given to a particular group of people at a particular time. The letters from the various apostles to the churches often included this kind of prophecy. There was also revelation given concerning future events such as Paul states in both of his letters to the Thessalonians and 1 Corinthians 15.

To the Thessalonians, Paul wrote: Don’t try to stop what the Holy Spirit is doing. Don’t treat prophecies as if they weren’t important. (1 THESS 5:19-20 New International Reader’s Version) A dedicated Christian that claims to serve the true God then goes out along with the world and its corrupt influences and partakes in its corruption adds to his sins, because he is treating prophecies as if they’re not important. This type of believer is ignoring all the words that God has caused to be spoken through the mouths of His prophets. Such a professed Christian has these words from the God he claims to serve; he has The Bible but ignores it in favor of men’s ideas, which appeal to his selfish desires. To do this is insulting to God and makes you a hypocrite and more reprehensible than an unbeliever.

The New International Reader’s Version translates the first part of 1 THESS 5:21 as “But test all prophecies.” But this verse would be more literally translated as “but all things test for genuineness.” It’s a separate command, but directly related to the previous one. It’s not just prophecy that should be examined. We should examine everything.

The Greek word for examine here, dokimazō, is also translated as test and prove. It means “to try to learn the genuineness of something by examination and testing, often through actual use.” It was used in a lot of contexts ranging from testing metals to assess their purity (1 PET 1:7), to testing the ability of new oxen (LUK 14:19), to testing each man’s spiritual work (1 COR 3:13) and to testing faith (2 COR 13:5). In this context, it means testing everything that would affect your spiritual life – which includes prophecy. The way to examine something is to apply God’s Word to it.

The second part of 1 THESS 5:21 (New International Reader’s Version) commands us to “Hold on to what is good.” This is a separate command, but it is directly related to testing. When you find that what is tested is good, then hold onto it. Good here,  kalos, is that which is of positive moral quality and therefore valuable. It is what is true, right, and honorable. It’s what is according to God’s Word and leads you into righteousness. To hold on to what is good means to continue to believe and act in accordance with that belief. When what you have examined passes the test, then hold on to it.

1 THESS 5:22 (New International Reader’s Version) commands us to “Say no to every kind of evil.” The idea here is that there are two opposite commands to the two opposite possible conclusions from testing. This is the second one. If you test something and find it is good, you hold onto it. If in turns out to be evil, then you say no to it!!

Evil in this verse is the word, ponāros and is the contrast to good. It is that which pertains to negative moral qualities and therefore is worthless. It’s what is false, wrong, and dishonorable. It is contrary to, or a perversion of God’s Word and it leads you into sin.

When something is not good, then it is in the camp of a kind of evil. We are to abstain, apechō, keep away from it. This is more than just non-involvement. Here it means to be away from it, hold it back, keep it off, and prevent it from happening. After something is tested you will have two choices. If it’s good, hold on to it; if it’s evil, just say no!  By saying, no, you hold it off. You actively stay away from it. While that is impossible for the unbeliever, it is possible for the believer. How you do it is taught in GAL 5:16 New International Reader’s Version): So I say, live by the Holy Spirit’s power. Then you will not do what your desires controlled by sin want you to do.

Christians are different because God has changed us by giving us a relationship with Him and a different understanding of the purpose of life. The combination creates the desire to continually pray with thanksgiving in all situations and rejoice in what God is doing. He sends His Spirit to indwell us, so we should not stifle His ministry in us. We rely on Him to lead and guide us giving us discernment to test all things by His Word including prophecy. We value all the gifts God gives His people, but we test to see what is good and hold fast to what passes the test. And we abstain from what is evil and fails the test. Is this what’s happening in your life? If so, praise The Lord. If not, ask yourself what needs to change!