Teen Tree Of Life – Commands Regarding Attitude, Actions, and Living In The Spirit – Part 1 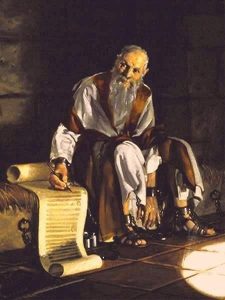 Commands Regarding Attitude, Actions and Living in The Spirit

Always be joyful. Never stop praying. Give thanks no matter what happens. God wants you to thank him because you believe in Christ Jesus. Don’t try to stop what the Holy Spirit is doing. Don’t treat prophecies as if they weren’t important. But test all prophecies. Hold on to what is good. Say no to every kind of evil. (1 THESS 5:16-22 New International Reader’s Version) In this last part of 1 Thessalonians, the apostle Paul shares a series of succinct encouragements and commands to the believers of the church in Thessalonica about how to excel even more in their walk with The Lord and in their love for one another. He addresses topics specific to both church life and personal life.

In a few verses prior to these, Paul had reminded the Thessalonians of the importance of showing appreciation and esteem to those who diligently labor in ministry: Brothers and sisters, we ask you to accept the godly leaders who work hard among you. They care for you in the Lord. They correct you. Have a lot of respect for them. Love them because of what they do. Live in peace with one another. (1 THESS 5:12-13 New International Reader’s Version) The message here is that it’s the work, not the office, that should bring about high regard.

Paul’s command to them to live in peace is a reference to the tranquility that comes from being in harmony and unity with one another. Those who veer off from a proper walk with The Lord need to be warned. They need someone who will lovingly confront and instruct them in The Truth so that they will walk in righteousness. Those who are afraid, need to be encouraged. The spiritually immature believers need someone that will come alongside them to point them to God’s Character and Promises so that their trust in Him will increase and they will grow in His Grace and Knowledge. The weak need to be helped by those who will uphold them and keep them from stumbling back into sin.

Sadly, it’s not uncommon to find people within the church, including those with high positions, who are either lazy or unqualified and Paul has this to say about them: These people don’t want to work. Instead, they make trouble. We are also asking you to encourage those who have lost hope. Help those who are weak. Be patient with everyone. Make sure that no one pays back one wrong act with another. Instead, always try to do what is good for each other and for everyone else. (1 THESS 5:14 -15 New International Reader’s Version) These commands also apply to other areas in our lives like school, work, and social interactions with others. Think about how difficult it is to do your job or succeed on a sports team with people who don’t want to work and who make trouble instead. Do you see how it relates?

All of these commands take continued patience because people are often slow to learn and tend to lose their focus along the way. You have to be merciful and keep at it without becoming upset. In doing so, you succeed in doing what is needed to bring about true unity and harmony. And in turn, you will bring about peace. That peace could be quickly disrupted if revenge is sought which would be contrary to godliness. Returning evil for evil only compounds evil. Christians must live the opposite way, always seeking after that which is morally good. Their good behavior must be shown not only toward other Christians, but to all people.

1 Thessalonians was written to a community of believers who had been Christians for only a short time – probably no more than a few months. We learn from The Book of Acts that during Paul's stay in Thessalonica, he preached in a Jewish synagogue on three successive Sabbath days. He evidently stayed in the city for some time after that and continued his work among the Gentiles. Although his ministry was successful to the extent that he won converts to Christianity from both Jews and Gentiles, he did encounter opposition, especially from Jews who resented that he was able to win Jewish followers.

Because of this opposition, Paul wisely left the city for fear that the newly formed Christian community would be persecuted because of him. He regretted leaving before they were well established in the faith but hoped to visit them again in the near future. When sickness prevented him from returning, he sent his colleague Timothy to strengthen the group and then report back to him on the progress that had been made. When Timothy returned to Paul with the good news that the members of the church were standing firm in their new faith, Paul wrote the First Epistle to the Thessalonians.

Now, we’ll look more closely at the eight succinct commands Paul gives in 1 THESS 5:16-22 (New International Reader’s Version). These commands cover two general areas. The first three (in verses 16-18) relate to attitude and communion with God: 16 Always be joyful. 17 Never stop praying. 18 Give thanks no matter what happens. God wants you to thank him because you believe in Christ Jesus. The last five (in verses 19-22) are related to living in the Spirit: 19 Don’t try to stop what the Holy Spirit is doing. 20 Don’t treat prophecies as if they weren’t important. 21 But test all prophecies. Hold on to what is good. 22 Say no to every kind of evil.

The first command – “Always be joyful” was written with the adverb placed before the verb. This gives it more emphasis. This verse would be more literally translated as “always be jouful.” Always (pavntote / pantote), at all times, on every occasion, makes this a universal command to believers that removes the exceptions that we as humans would otherwise quickly make. We are to always rejoice without exception. That would be an irrational command if rejoicing was the equivalent of happiness and dependent upon circumstances. This is because there are many, many circumstances that are legitimate causes of sadness. The Thessalonians had experienced the normal sad things of life including deaths of loved ones. They were also experiencing persecution for their faith in Christ. How then could they always rejoice?

Circumstances are always changing, and happiness is based on whether the situation is considered favorable or unfavorable. Joy transcends happiness so that it can be present even when the situation itself is sad. For example, Paul points out in 2 COR 8:1-4 (The Message Bible): Now, friends, I want to report on the surprising and generous ways in which God is working in the churches in Macedonia province. Fierce troubles came down on the people of those churches, pushing them to the very limit. The trial exposed their true colors: They were incredibly happy, though desperately poor. The pressure triggered something totally unexpected: an outpouring of pure and generous gifts. I was there and saw it for myself. They gave offerings of whatever they could—far more than they could afford!—pleading for the privilege of helping out in the relief of poor Christians. Their joy was bound to God’s Grace which they had received and not their circumstances of affliction and poverty. Interestingly enough, the verb here for rejoice, caivrw / chairō, is related to the word for grace (cavriv / charis). The ability to rejoice is tied to walking in God’s Grace.

Now bear in mind that this is a command, so it is not optional for us as believers in Christ. We are commanded to rejoice. It’s not a suggestion. So, how is that to be done in practical life? Well first, you have to understand that you can rejoice and still be sorrowful. Look at what Paul wrote in 2 COR 6:10 (New International Reader’s Version): We are sad, but we are always full of joy. We are poor, but we make many people rich. We have nothing, but we own everything. Rejoicing will have an emotional component, but it neither masks nor removes other emotions or the expression of them.

What then does Paul mean by this command and how is it carried out? As already noted, Paul ties rejoicing in with God’s grace. It’s a response to circumstances that considers God’s Work within the situation, with a view to God’s Ultimate Work in Salvation and The Promise of Jesus Christ’s Return. That is why Paul could carry a theme of rejoicing throughout The Book of Philippians despite being in jail and even though others were purposely trying to cause him distress. He could see God’s Hand at work in the midst of his circumstances and wrote about it in PHIL 1:12-14 (New International Reader’s Version): Brothers and sisters, here is what I want you to know. What has happened to me has actually helped to spread the good news. One thing has become clear. I am being held by chains because I am a witness for Christ. All the palace guards and everyone else know it. And because I am a prisoner, most of the believers have become bolder in the Lord. They now dare even more to preach the good news without fear. Paul’s hope in Christ transcended the situation so that for him “to live is Christ, and to die is gain.” (PHIL 1:21 New International Reader’s Version) He would rejoice no matter which direction his imprisonment took.

To summarize, first, the command to always rejoice is built upon the fact that you have received God’s Grace in Salvation. You can’t obey this or any of the other commands unless you are a true Christian. Second, faith in Christ gives you a different perspective and purpose in life. You can see things from God’s Eternal Perspective and live for His Glory – instead of living for your own selfish desires according to a temporal, human outlook. These enable you to have an attitude toward life that is directed by seeing God’s Hand at work in your life and living accordingly instead of being controlled by the circumstances in which you find yourself. Christians should always rejoice because God is always at work and His Promises are always true and fulfilled. This should give you an idea of how very important it is to learn and apply God’s Word is!