Teen Tree of Life. The Doctrine of the Pivot. Part 1. 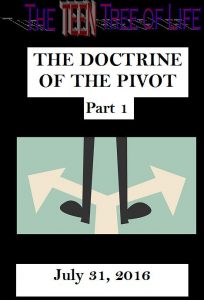 The Doctrine of
the Pivot.

Technically, the Pivot may include all believers who have placed virtue as their first priority in the Plan of God. Believers in the Pivot stand out in contrast to believers living in the cosmic system whose arrogance results in self-righteous and crusader arrogance. Crusader arrogance is the self-righteousness arrogance that tries to straighten out the world from its error and mistakes.  An arrogant person places his personal standards above the law or any form of establishment or authority and ignores God’s Word.

The Pivot includes believers do not place works or their own righteousness before virtue! The command for the Christian way of life is virtue first. Not witnessing! Not serving! Not praying! Not doing great things for God...but virtue first.

Virtue includes devotion and loyalty to your family.  Some believers have no loyalty at all except to themselves. Loyalty to self is arrogance. It means you’re pre-occupied with yourself. In order to be virtuous, you have to accept authority.  Virtue begins with a willing acceptance of parental authority which gives unity and strength to the family.  Virtue also means reverence and devotion to the authorities of those in power. And of course, this includes respect and loyalty toward God. It also meant respect for the laws of establishment.

The Pivot is made up of believers who have virtue and virtue is the visible manifestation of the invisible, like metabolized Bible doctrine and the Power of The Holy Spirit controlling the soul. Humility is the foundation for all virtue.

For the believer who is part of the pivot, virtue is the quality of essential good; it’s not proving one’s worth. Having virtue means you’re not a phony, which so many believers are. These phony believers who have no virtue hate the truth that exposes them: So have I become your enemy by telling you the truth? GAL 4:16. Also, trying to prove one’s worth is arrogance; improving one’s worth spiritually is wisdom. Arrogance is the complete opposite of virtue. Believers who reside and function in the Pre-Designed Plan of God produce virtue, while believers who reside and function in the cosmic system destroy virtue and produce fake virtue or arrogance. It is virtue manufactured inside the Pre-Designed Plan of God that is the source of all true happiness in life. Therefore, virtue and happiness coexist. There is no happiness in the cosmic system. Fake virtue manufactured in the cosmic system is the basis of all hypocrisy in life.

In the dispensation of the Church-Age (which is the time in which we live), the Christian service that is most important is done invisibly. Others cannot see it. Believers in the Pivot stand out in contrast to believers living in the cosmic system, whose arrogance results in self-righteous, crusader arrogance. These believers are sinners who are recognized by their own clichés, by their hypocritical sweet personalities, by their self-righteousness, by their  distortion of doctrine and by their disorientation to reality.  They are potential revolutionists. Sadly, a certain number of these types of believers are even mentally ill from arrogance. In fact, you can also recognize the shrinking of the Pivot by the social action and civil disobedience advocated and practiced by believers.

This is so evident in today’s world. Think about all the tragedies in our country which we see in the news — shootings, stabbings, physical violence. Some of these horrendous acts are being committed by believers who are mentally ill as a result of their arrogance. The believer’s civil responsibility is defined under the laws of Divine Establishment, as in ROM 13:1: Let every person be in subjection to the governing authorities. For there is no authority except from God, and those which exist are established by God.

ROM 13 goes on to say: Therefore he who resists authority has opposed the ordinance of God; and they who have opposed will receive condemnation upon themselves. For rulers are not a cause of fear for good behavior, but for evil. Do you want to have no fear of authority? Do what is good, and you will have praise from the same; for it is a minister of God to you for good. But if you do what is evil, be afraid; for it does not bear the sword for nothing; for it is a minister of God, an avenger who brings wrath upon the one who practices evil. Wherefore it is necessary to be in subjection, not only because of wrath, but also for conscience’ sake. For because of this you also pay taxes, for rulers are servants of God, devoting themselves to this very thing. Render to all what is due them: tax to whom tax is due; custom to whom custom; fear to whom fear; honor to whom honor. (ROM 13 )