Teen Tree of Life. The Doctrine of the Sins of the Tongue. Part 1 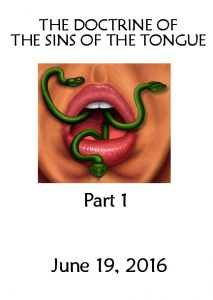 Sin is defined as a "violation of the law or standards of God." These Divine Laws and Standards are revealed in the Bible. A very important fact concerning sin is that all sin is against God, even if it is committed against others or done to yourself. Since God's Character and Standards are Perfect, anything that violates this is defined in the scripture as sin. So sin is an act of volition against God.

Sin originated from Adam's violation against a direct command from God. This is why God imputes Adam's original sin to the old sin nature when He gives soul-life at birth. It is important to note that sin preceded human good and evil. Adam had to first sin in the garden before he produced good or evil in the garden.

Though temptation comes from the old sin nature, sin itself always comes from our own free will, also known as volition. Sin can be a thought, a motive, or an act of wrongdoing. All of these put you in a state of alienation from God. As already noted, sin comes from human volition. At the point of our physical birth, we are born physically alive and spiritually dead. This spiritual death means total depravity; therefore, we are prone to sin. We are spiritually dead before we commit our first sin. Furthermore, we are totally helpless to do anything about our status of total depravity and totally helpless to understand any spiritual phenomena, because we are dichotomous. That means we have a body and soul but no human spirit.

In order for us to understand any spiritual phenomena such as the Gospel, God the Holy Spirit must act as a human spirit, on our behalf.  So the twofold source of sin is spiritual death at birth and then the function of human volition. We start sinning because we are already spiritually dead. All sin is the result of human volition. And no sins are forgiven the unbeliever in spiritual death until he believes in Jesus Christ. For the believer, all sins prior to Salvation are blotted out at the moment of belief in Jesus Christ.

The two categories of sin come from human volition. Sins of Cognizance occur when a person recognizes a temptation as a sin and willingly acts upon it. An example of this is you are in a candy store and the owner is in the back room; because you’re alone, you’re tempted to take a piece of candy without paying for it. You know it’s a sin but you do it anyway. This is a Sin of Cognizance. So cognizance is simply awareness.  This sin is a transgression involving human perception and or cognizance. Temptation, however, in and of itself, is not sin. It is not until we act upon that temptation that it becomes sin.

The second category is the Sins of Ignorance. In this category a person is not aware that the old sin nature is tempting him to sin; but nonetheless, he or she desires to commit the sin and does so. An unknown sin is still sin. This is because Divine Knowledge is available to all. It is still a volitional decision, so it does not matter that the act is committed without human awareness or cognizance.

Because all sin is related to the function of human volition, the believer is responsible for both categories of sin in his life. In both of these categories, the believer is equally guilty. God doesn't excuse anyone. What a believer thinks about his sins doesn't matter, because God is not impressed by it. So volition is involved in both known and unknown sins.

Since we are totally helpless to solve sin, and responsible to God even for sins we are unaware of, how does a believer handle the sin problem? First of all the believer must understand that Jesus Christ was judged on the Cross for both sins of ignorance and sins of cognizance. When the believer acknowledges or names a sin of cognizance in recovery or rebound, he is simultaneously forgiven for the sins of ignorance committed during the time of being out of fellowship. This is why rebound is so important: If we confess our sins, he is faithful and righteous to forgive us our sins and to cleanse us from all unrighteousness. (1JO 1:9) Of course, this is how we begin our study of God’s Word. And we do this because it ensures our fellowship with God. The sins of cognizance and the sins of ignorance cause the believer to get out of fellowship with God, because the free will of the believer was used. Ignorance is no excuse, because both the sin nature and human volition are involved in the commission of sin.

Now, let’s look at the old sin nature which is so important to our subject – The Doctrine of the Sins of the Tongue.  The essence of the sin nature has four categories. The first category is the area of weakness. This is the source of all temptation to sin. When linked with negative volition, this area of weakness results in personal sin. Remember, it is not sinful to be tempted, but it is sinful to succumb to that temptation.

The second category is the area of strength. This produces a negative type of good, called human good. Human good is also called "dead works" and "wood, hay, and stubble." Human good is the production of the believer in the cosmic system and it is not valid in God's eyes.

The fourth category is the lust pattern of the old sin nature. Lust refers to any area in life where your normal desires control you, thereby destroying your Christian walk. The lust pattern of the sin nature eliminates or destroys Bible doctrine as the number one priority in life. Lust destroys the motivation of the believer to execute the Pre-Designed Plan of God, neglecting the principle of Perception, Metabolization, and Application of Bible doctrine.