Teen Tree of Life. The Doctrine of the Sins of the Tongue. Part 2 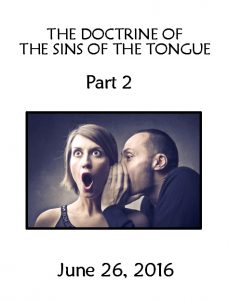 In our continuing study of the Doctrine of the Sins of the Tongue, let’s look at the old sin nature which is so important to our study.  The essence of the sin nature has four areas. The first is the area of weakness. This is the source of all temptation to sin. When linked with negative volition, this area of weakness results in personal sin. Remember, it is not a sin to be tempted, but it is a sin to succumb to that temptation.

The second is the area of strength. This produces a negative type of good, called human good. Human good is also called "dead works." Human good is the production of the believer in the cosmic system and it is not valid in God's eyes.  The third area is the trends of the sin nature. These trends are legalism, which results in moral degeneracy, and antinomianism, which results in immoral degeneracy. The idea here is that the sin nature has two trends – one in which you sin though being moral (being arrogant, for example) and the other in which you commit immoral acts (like murder). The fourth area is the lust pattern of the old sin nature.

Lust refers to any area in life where your normal desires control you, and in doing so, destroys your Christian walk. The lust pattern of the sin nature destroys Bible doctrine as the number one priority in life. Lust destroys the motivation of the believer to execute the Pre-Designed Plan of God, neglecting the principle of Perception, Metabolization, and Application of Bible doctrine. Lust is a distraction to the normal operation of the Christian Way of Life. Lust divorces the believer from reality, which nullifies the understanding and use of the Problem-Solving Devices. Lust turns the believer into a tricky and deceitful person. Lust destroys the believer's motivation to glorify God and turns the believer's motivation into self-promoting motivation. Lust can be for anything – money or power, for example!

The third category is our subject – Sins of the Tongue or verbal sins. These verbal sins include gossip, maligning, slander, judging, lying, and verbal deception. The fourth category is overt sins. They include sexual sins and criminal sins.

Let's take a closer look at verbal sins. Simply put, verbal sins originate from mental attitude sins, which lead to motivational sins, which lead to the sins of the tongue. Verbal sins are designed to destroy your life. Look at JAM 3:5-10: So also the tongue is a small part of the body, and yet it boasts of great things. See how great a forest is set aflame by such a small fire!  And the tongue is a fire, the very world of iniquity; the tongue is set among our members as that which defiles the entire body, and sets on fire the course of our life, and is set on fire by hell.  For every species of beasts and birds, of reptiles and creatures of the sea, is tamed and has been tamed by the human race. But no one can tame the tongue; it is a restless evil and full of deadly poison.  With it we bless our Lord and Father, and with it we curse men, who have been made in the likeness of God; from the same mouth come both blessing and cursing. My brethren, these things ought not to be this way. What a verse!!

Three of the seven worst sins, from God's viewpoint, are related to our subject of verbal sins:  There are six things which the Lord hates, in fact, seven are an abomination to him: (1) Arrogant eyes, (2) a lying tongue, and (3) hands that shed innocent blood, (4) A right lobe that devises evil plans [anti-authority sins, conspiracy, and revolution], (5) feet which run rapidly to evil [a trouble-maker], (6) A false witness who utters lies [perjury], and (7) a person who spreads strife among the brethren [gossip, slander, maligning, judging].  (PRO 6:16-19)