Teen Tree of Life. The Doctrine of the Sins of the Tongue. Part 3. 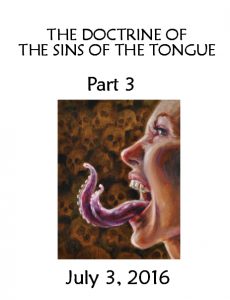 As we have been learning, sins of the tongue are committed by self-righteous people who are often jealous, petty types who think more highly of themselves than what they ought to. So the lesson here is to try not to be self-righteous!  The self-righteous person is marked by confidence or pride in the correctness of his or her beliefs or moral conduct. This type of person often has a pious intolerance of the beliefs of others. A key word used by the self-righteous is "duty" or "responsibility." The self-righteous Pharisees thought it was their "duty" to destroy the Perfect Son of God. The legalistic Judaizers – a term for Christians who insist that their co-religionists should follow the Law of Moses – also thought it was their "duty" to discredit the grace ministry of Paul and to stone him. So be careful of these individuals who consider it their duty to speak evil and discredit other people. Committing sins of the tongue makes you self-righteous so beware!

The sins of the tongue are mentioned in several passages throughout the Bible. Look at ROM 2:1 Therefore you have no excuse, every one of you who passes judgment, for in that which you judge another, you condemn yourself; for you who judge practice the same things.  In the blindness of arrogance, the carnal believer commits the worst of sins of all when he maligns, slanders, or judges someone else for committing sins. Self-righteous arrogance makes the evil believer act as though he is replacing Our Lord as the presiding Judge of the Supreme Court of Heaven.

A legalistic believer judges the sins of other believers even if the sins are imagined.  Very often those who judge with the tongue (by slandering, gossiping or maligning) are what society sees as respectable people. Respectability for maligning others is one of the most evil functions in the Christian Way of Life. The legalistic judge not only blasphemes, but he ignores the fact that he is using his own sin nature to the maximum. It is a double standard of arrogance for a believer to judge, slander, malign, or condemn the sins of others, while at the same time ignoring or being blind to his own sins. So ROM 2:1 teaches that in the slander, maligning, and judging of other believers, the self-righteous arrogant believer is not vindicating (defending) himself, but he is actually condemning himself. Those with such self-vindication and self-righteousness regard it as their duty to gossip, slander, malign, and judge others. NOT! It is NEVER the duty, responsibility, or prerogative of the believer to assume the role and function of Jesus Christ as the Supreme Court Judge.  It is however, the responsibility of believers to self-evaluate or judge their own lives in light of the standards of Bible doctrine.  Bible doctrine in the soul produces true standards of grace-righteousness – which is the righteousness we want to have.  Grace-righteousness and self-righteousness are mutually exclusive; this means that if you are self-righteous, you are simply NOT operating in grace. If you are operating in grace-righteousness, you will avoid sins of the tongue.

Two verses are pertinent to the self-righteous arrogance of the legalistic believer. The first verse is ROM 14:4: Who are you to judge the servant of another? To his own Lord he stands or falls. And stand he will; for the Lord is able to make him stand. The second pertinent verse is ROM 14:10: But you, why do you judge your fellow-believer? Or you again, why do you regard your fellow-believer with contempt? For we shall all stand before the judgment seat of Christ. So, it is important to remember that we are all the servants of our Lord Jesus Christ. We are members of the Body of Christ and the Royal Family of God. The evaluation of our lives is the responsibility of Our Lord. In the case of criminality, that responsibility has been delegated by Our Lord to the Government.

Regarding another believer with contempt indicates a tremendous function of arrogance in your life. The reason is because no one knows the exact stage of another believer's spiritual growth.  And if one believer exercises contempt for another, it is inevitable that he will find some way to malign, slander, or judge him.

After the Resurrection of the Church all believers will be evaluated by our Lord Jesus Christ. This evaluation will have two aspects. The first is the condemnation of all of the things we have