Teen Tree of Life. The Doctrine of the Sins of the Tongue. Part 4. 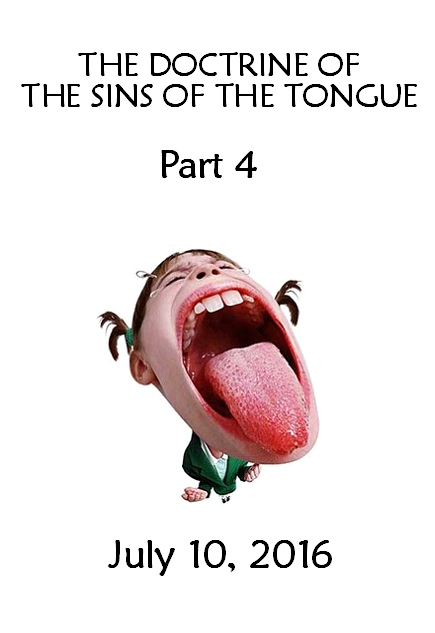 BEFORE we begin, if you are a believer in Jesus Christ, take a moment to name your sins to God the Father. This will allow you to be filled with the power of the Holy Spirit as you read this booklet ( EPH 5:18 & 1JO 1:9).
IF YOU HAVE never believed in Jesus Christ as your Lord and Savior, you have that opportunity right now. Simply tell God the Father that you are believing on His Son
Jesus Christ as your Lord and Savior. If you make that
decision, you are now a believer and will always be a child of God! When you die, you will spend eternity with Him forever in heaven! (JOH 3:16 & ACT 16:31).

There are three categories of sins of the tongue. The first category is slander. This includes gossiping, maligning, complaining about, and judging others. The second category is falsehood which includes untruth, deception, misrepresentation, perjury, fabrication, pathological lying, distortion, hedging, puzzling and unclear expressions designed to mislead, verbal deception, and hypocrisy. The third category is whining and complaining. This category covers complaining when you are blessed by God and are the beneficiary of His Grace. It is disorientation to the Grace of God. This is whimpering, whining, grumbling, or complaining by the believer. This is experientially contradictory to the Pre-Designed Plan of God. In the sniveling of arrogance, the individual frets and complains in a whining and tearful manner. Please note, however, that there is a legitimate expression of pain which is not related to the sins of the tongue.

The sins of the tongue carry liability for triple compound Divine discipline. This is taught by Jesus in MAT 7:1: "Do not judge so that you will not be judged." Believers are ordered by God to stop slandering, maligning, or judging others. The sins of the tongue include two categories of sinfulness related to Christian degeneracy:  mental attitude sins which motivate verbal sinning and actual verbal sins. No one ever slanders, maligns, judges, or gossips about someone else without the motivation of some mental attitude sin. Verbal sins are motivated by fluctuating between self-righteous arrogance and self-pity. Verbal sins involve verbal murder, which is the character assassination of others, plus the blasphemy of acting like God in judging others.  Everyone who hates his brother is a murderer. (1JO 3:15a)

The sins of the tongue include three categories of liability for disciplinary action from God - Triple Compound Discipline.  The first is Divine discipline for the mental attitudes that motivate sins of the tongue. The second is Divine discipline for the verbal sin itself.  The third is Divine discipline for the sins that you mention.  Here is the scenario: you accuse another believer of certain sins, real or imagined. The sins that you name have penalties attached to them. If the person is guilty, his discipline is removed, because the judgment didn't come from Heaven. Then, the punishment is transferred to you for maligning the person who sinned. If the person is innocent and the sins are imagined, then the victim gets blessing comparable to the intensity of the discipline. However, this is only as long as the victim puts the matter in the Lord's Hands and does not attempt to vindicate himself.

So the victim of your slander doesn't receive penalties, you do! You are mentioning sins which you didn't commit, but you assign them to your victim by slandering him. You get the punishment for the mental attitude sins which motivated the verbal sins and for the sins which you named. Therefore, while not committing those sins, you get judged for those sins as if you had committed them. This is the Perfect Justice of God in which He reminds you to mind your own business and live your own life as unto the Lord!!!

Let’s look at MAT 7:2: For in the way that you judge, you will be judged. And by your standard of measure, it will be measured against you.  The first sentence in this verse is the law of liability regarding verbal sins. There is no stronger law in the Supreme Court of Heaven.  The second sentence in MAT 7:2 refers to the law of the transference of disciplinary action. If you are guilty of verbal sins, you will always receive Divine disciplinary action for the sins you accused other person of committing. It’s double because the discipline is for your verbal sins and for those sins you accused someone else of committing.  The sins you name carry punitive liability from God. The victim of your slander and judging does not receive that punitive liability. Again, God transfers to you the discipline for the gossip, the slander, and the judgment.

So the judgment or penalty for sins verbalized in slander is transferred by God from the victim to the accusing believer. The victim you judge and slander is not punished for those sins, but you are. No believer has the right to destroy the privacy of the priesthood of another believer by the sins of the tongue. Verbal sins contradict the principle of live and let live. So even though you are not committing the sins that you mention in slandering someone else, the punishment of those sins is still assigned to you.

There is great blessing in avoidance of sins of the tongue. This is taught in PSA 34:12-13: Whoever of you loves life and desires to see many good days, keep your tongue from evil and your lips from telling lies. The pattern and punishment for the sins of the tongue is mentioned in PSA 52:1-5: Why do you boast of evil, you mighty hero? Why do you boast all day long, you who are a disgrace in the eyes of God? You who practice deceit, your tongue plots destruction; it is like a sharpened razor. You love evil rather than good, falsehood rather than speaking the truth. You love every harmful word, you deceitful tongue! Surely God will bring you down to everlasting ruin: He will snatch you up and pluck you from your tent; he will uproot you from the land of the living.            Selah.                                     {to be continued}