Teen Tree of Life. The Silence of God. 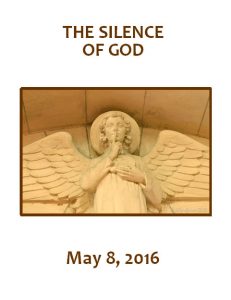 In GEN 32:24, Jacob had his time alone with God and it wasn’t until he was left alone with God that his name was changed to “Israel.” Then Jacob was left alone, and a man wrestled with him until daybreak. When he saw that he had not prevailed against him, he touched the socket of his thigh; so the socket of Jacob’s thigh was dislocated while he wrestled with him. Then he said, “Let me go, for the dawn is breaking.” But he said, “I will not let you go unless you bless me.” So he said to him, “What is your name?” And he said, “Jacob.” He said, “Your name shall no longer be Jacob, but Israel; for you have struggled with God and with men and have prevailed.” (GEN 32:24-28) Going through struggles alone increases your faith in God, bringing spiritual growth. When you are forced into a situation which requires reliance on God and you are left with no human resources, life takes on a new dimension! You are afforded the opportunity to experience just how beautifully the application of Bible doctrine can bring you through a time of pressure.

Look at 2 CH 32:31: Even in the matter of the envoys of the rulers of Babylon, who sent to him [Hezekiah] to inquire of the wonder that had happened in the land, God left him alone only to test him, that He might know all that was in his heart. In this verse, God left Hezekiah alone so that he would figure out what he felt in his heart. Pressure and time alone with God brings to light who we really are! It is either an exciting time or a time in which we realize we need more Bible doctrine!

In some cases, the Silence of God is manifested by all doors being closed. What will you do when all the doors are closed in your life? God is silently testing the doctrine in your heart. It is your time to believe what you have learned and operate in it or perish!

Our Lord was left alone to function in His doctrine in JOH 16:32: Behold, an hour is coming, and has already come, for you to be scattered, each to his own home, and to leave Me alone; and yet I am not alone, because the Father is with Me. Now, this is a verse that we should have tattooed on our palms so we can look at it when we feel alone and afraid! We, too, will have our time alone with God but it will do us no good unless we truly believe that He is there despite the Silence! When we question whether or not we can handle a certain situation, we are actually doubting God’s Sovereignty! Do you think a Perfect, Just and Loving God would place you in a predicament that was beyond your capability???

God is Wise, Perfect, Fair and Incorruptible! He is the One Judge Who has never rendered a wrong decision! He has an absolutely perfect reason behind everything that happens in our lives. And though our finite minds cannot conceive the logic involved or the future, we must operate in faith! It’s either operate in faith or freak out! It’s your choice!

You will not always understand all that you go through in your lifetime, therefore, you must trust in the One Who Knows all and will never forsake you! God is Faithful and Just and His Grace is always available to us. He never lets you go it alone without first seeing to it that you’re exposed to the doctrine you need in a particular situation. See how important Bible class is??? Now, you may not be happy with what God is allowing in your life, at any given time, but you must still operate in faith, recall doctrine and realize it is for the benefit of your spiritual advancement and the Glorification of God that this certain things take place.

God permitted a fallen angel of great ability to penetrate the Wall of Fire around the apostle Paul in 2CO 12:7-10: Because of the surpassing greatness of the revelations, for this reason, to keep me from exalting myself, there was given me a thorn in the flesh, a messenger of Satan to torment me—to keep me from exalting myself!  Concerning this I implored the Lord three times that it might leave me. And He has said to me, “My grace is sufficient for you, for power is perfected in weakness.” Most gladly, therefore, I will rather boast about my weaknesses, so that the power of Christ may dwell in me. Therefore I am well content with weaknesses, with insults, with distresses, with persecutions, with difficulties, for Christ’s sake; for when I am weak, then I am strong. Now you may be thinking, “Hmmmm, that doesn’t seem very loving!” But it is not your place to question what God allows! He knows exactly what we need and what we do not need. And Paul needed an angel to bother (“buffet”) him! God allowed it and then stepped back in silence to allow Paul an opportunity to recall doctrine. And he did!

All suffering is a Sovereign Decision from God. Such suffering is designed to have us focus on God’s Grace. It is not designed to have us focus on the counsel of friends or philosopher’s musings. In fact, nothing can be more confusing to a person who has doctrine, than counseling from people who don’t! We see this happening with Job who was greatly confused by his three legalistic friends. Their counsel caused him to lose his focus on God’s Character. Satan used Job’s weak friends to distract him and though it worked for a while, we eventually see Job regaining his spiritual senses and bouncing  back! This only proves that failure and sinning have absolutely nothing to do with the Christian way of life. It is advancing – picking up and going forward – that matters. And remember, Job was a mature believer at the time which only goes to prove that even when we walk in the light, we can fail! There is nothing wrong with failing but there is everything wrong with allowing your failures and sins to keep you stuck in the mire of guilt! The Christian way of life is all about rebounding (naming and citing your sins to God in His Son’s Name) and going forward.

It’s all about FAITH! The faith we utilize during the times when God is Silent, during times of pressure and in our daily Christian walk, is a power that is contrary to the world system of power. But the believer with positive volition will keep the Word of God as his or her number one priority. The believer who operates in faith will not allow adversity to sway his scale of values. The Silence of God will actually put muscle on the faith of the belier with the proper focus. And though Job listened to his foolish, legalistic friends and allowed them to distract him, eventually legalism brought him back to the reality that if we endure in faith, God will reward us!