Teen Tree of Life – A Hope That Transcends Despair – Part 3 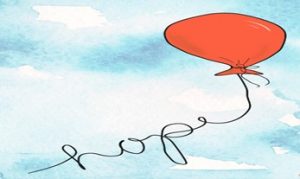 A Hope That Transcends Despair - Part 3

In HAB 3:9-15 (New International Reader’s Version), the prophet continues to describe The Lord’s Manifestations of Himself by looking back at what He had done in the past. Instead of using the third person as he did in verses 3-7 to talk about The Lord, he continues in the second person: You got your bow ready to use. You asked for many arrows. You broke up the surface of the earth with rivers. The mountains saw you and shook. Floods of water swept by. The sea roared. It lifted its waves high. The sun and moon stood still in the sky. They stopped because your flying arrows flashed by. Your gleaming spear shone like lightning. When you were angry, you marched across the earth. Because of your anger you destroyed the nations. You came out to set your people free. You saved your chosen ones. You crushed Pharaoh, the leader of that evil land of Egypt. You stripped him from head to foot. His soldiers rushed out to scatter us. They were laughing at us. They thought they would easily destroy us. They saw us as weak people who were trying to hide. So you wounded Pharaoh’s head with his own spear. Your horses charged into the Red Sea. They stirred up the great waters. The first line describes the preparation of a warrior for action. The bow is removed from its sheath and made ready for the arrows it will launch.

God takes action by His Word because He speaks and it is done. We see this in PSA 33:6 (New International Reader’s Version): The heavens were made when the Lord commanded it to happen. All the stars were created by the breath of his mouth. In DEUT 32:40-42 (New International Reader’s Version) He swears to take vengeance on His adversaries: “I raise my hand to heaven. Here is the promise I make. You can be sure that I live forever. And you can be just as sure that I will sharpen my flashing sword. My hand will hold it when I judge. I will get even with my enemies. I will pay back those who hate me. I will make my arrows drip with blood. My sword will destroy people. It will kill some. It will even kill prisoners. It will cut off the heads of enemy leaders.”

A great example of God taking action by His Word appears in JOSHUA 10. It records the conquest of the southern nations in Canaan after their alliance attacked the Gibeonites who had made an alliance with Joshua. In verse 12, Joshua prays that The Lord would halt the progression of the Sun and Moon so that the conquest could be completed that same day, and the Lord granted the request: The sun stopped in the middle of the sky. It didn’t go down for about a full day. There has never been a day like it before or since. It was a day when the Lord listened to a mere human being. (JOSH 10:13-14 New International Reader’s Version) Imagine what hope Joshua felt knowing he could simply ask God for this help and receive it! How would it feel to you to have God respond so immediately to such a huge request??

Just prior to this, as the Canaanites fled from Joshua down the descent of Beth-horon, The Lord sent a storm with large hailstones that killed more of the enemy than Israel had killed with swords! Hailstones are only formed in severe storms which also produce thunder and lightning. Those events match well Habakkuk 3:11 (New International Reader’s Version): The sun and moon stood still in the sky. They stopped because your flying arrows flashed by. Your gleaming spear shone like lightning. Joshua 11 then records the conquest of the northern nations of Canaan including capturing their kings and putting them to death. The conquests of all the Canaanite nations match HAB 3:12-13 (above).

Habakkuk’s response is honest in describing how disturbed He was at what God had revealed to Him and what he expected to happen in the near future. At the same time, he found a reason to hope that transcends the despair that would otherwise set in: I listened and my heart pounded. My lips trembled at the sound. My bones seemed to rot. And my legs shook. But I will be patient. I’ll wait for the day of trouble to come on Babylon. It’s the nation that is attacking us. The fig trees might not bud. The vines might not produce any grapes. The olive crop might fail. The fields might not produce any food. There might not be any sheep in the pens. There might not be any cattle in the barns. But I will still be glad because of what the Lord has done. God my Savior fills me with joy.  The Lord and King gives me strength. He makes my feet like the feet of a deer. He helps me walk on the highest places. (HAB 3:16-19) What a perfect description of the hope that transcends despair!!

Knowing that God was sending the Chaldeans to invade and conquer Judah caused Habakkuk genuine fear. He was so afraid that his body reacted. His belly shook, his lips quivered, his bones became weak and his whole body trembled. Yet all he could do was wait for the fulfillment of what God had revealed. The hope he had would pull him through the waiting, though! Just like it can for you!

Now, since Habakkuk was aware of The Lord’s Actions in the past, he had hope that God would work in similar ways in the future. God had promised destruction by the Chaldeans in the past, but He had also promised destruction of the Chaldeans in the future. More importantly, God would keep His covenant with Abraham. There would be a remnant to fulfill His Promises. God was going to chasten His people, not annihilate them. The result is that instead of despair, Habakkuk will rejoice in The Lord Who is His Savior. That is only possible because the Lord is his strength. God enables him to do it.

Habakkuk ends with a notation on how his writing was to be used during temple worship. It states: This prayer is for the director of music. It should be sung while being accompanied by stringed instruments. (New International Reader’s Version) This means that his prayer psalm is something more than a personal expression by Habakkuk. It would be used by all who shared Habakkuk’s trust in God and that kind of hope that transcends despair – and that would include us.

Remember, our hope is not in God doing something to change our present circumstances so that we can have easy and peaceful lives. If that was our hope, we would have every reason to be in despair. Our hope is in God Himself who changes us so that we are reconciled to Him and can live in righteousness in the present with eternity in view.

Jesus Christ is the Savior, and He redeems and grants forgiveness of sins to those who have faith in Him so that we are adopted into God’s family and made a citizen of heaven which will be our future home. Through belief in His Son, we will become His Ambassador to this world to proclaim His Message of how to be reconciled with God.

The hope of a Christian transcends the circumstances of this world – even those that would otherwise cause despair – because it is not based on anything in this world. It is based in Jesus Christ Himself and His Promises. Remember Habakkuk’s words, as we end this study: But I will still be glad because of what the Lord has done. God my Savior fills me with joy.  The Lord and King gives me strength. He makes my feet like the feet of a deer. He helps me walk on the highest places. (HAB 3:16-19 New International Reader’s Version)