Teen Tree of Life – The Doctrine of Mercy – Part 3 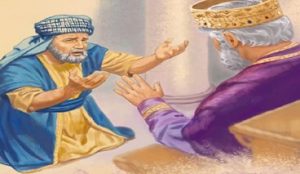 The Doctrine of Mercy - Part 3

Last week, one of the wonderful truths we learned is that through God’s Mercy, we are blessed with adoption into His family. What could be greater than that??

As members of the Royal Family of God, we are described as “vessels of mercy,” which means we have received mercy. ROM 9:22-23 (New International Reader’s Version) talks about how God showed us mercy: What if God chose to show his great anger? What if he chose to make his power known? But he put up with the people he was angry with. They were made to be destroyed. What if he put up with them to show the riches of his glory to other people? Those other people are the ones he shows his mercy to. He made them to receive his glory.

You are a vessel of mercy and because of this, you were called out of spiritual deadness and sinful darkness by mercy, through mercy, and for mercy. In our rebellion, we didn’t deserve to be awakened to and restrained by God. Every influence that worked on us to bring us to Christ was a mercy from God. Every enjoyment that we will ever have, forever and ever, will be a merciful enjoyment. And mercy itself will be supremely pleasant to taste and know.

As vessels of mercy, we must continually focus on this: we do not deserve to be Christians. We do not deserve to be chosen or called or saved or transformed or heaven-bound. It all comes from God’s Mercy. And His Mercy is undeserved. Nothing we are made God decide to have mercy on us. That we have received anything good — any forgiveness, any acceptance with God, any glimpse of His Glory, any hope of everlasting joy — all comes out of His Mercy. That is what it means to be a vessel of mercy. It means being able to say: I am sure that your goodness and love will follow me all the days of my life. And I will live in the house of the Lord forever. (PSA 23:6 New International Reader’s Version)

When we believed in Jesus Christ, we received forty things from God. That was the beginning of His Mercy and Grace toward us. After that, we receive Logistical Grace Support and blessing. Logistical grace is defined as divine planning, divine support, divine provision, and divine blessing, given by God to every Church-Age believer. Whether a person is a winner or loser believer, they are given Logistical Grace Support for the execution of the Pre-Designed Plan of God. Logistical Grace includes everything that you need to fulfill this Plan. It includes food, water, clothes, shelter, air to breathe, a Bible, a pastor-teacher, etc. Logistical Grace is a free gift by God’s Grace that originates from His Justice and is imputed to the very Righteousness of God in every Church-Age believer.

We are the beneficiaries of the most fantastic plan that God has ever put together for those who are believers in Jesus Christ. However, make sure that you understand that we do not earn or deserve a thing and that The Lord can and will show Mercy to whomever He chooses: He said to Moses, “I will have mercy on whom I have mercy. I will show love to those I love.” So it doesn’t depend on what people want or what they do. It depends on God’s mercy. (ROM 9:15-16 New International Reader’s Version)

This is why we should all have an attitude of mercy toward each other in every facet of our lives. Paul writes about this principle: At one time you did not obey God. But now you have received mercy because Israel did not obey. In the same way, Israel has not been obeying God. But now they receive mercy because of God’s mercy to you. God has found everyone guilty of not obeying him. So now he can have mercy on everyone. (ROM 11:30-32 New International Reader’s Version)

One of the greatest examples of mercy is the life of the apostle Paul. In genuine humility, Paul wrote that he was the worst sinner who ever lived and that he was the least of all the apostles. As an unbeliever, Paul murdered many Christians. Yet he became the greatest Church-age Christian. Paul became an apostle as a result of the sovereign decision of Jesus Christ according to EPH 4:11 (New International Reader’s Version): So Christ himself gave the gift of the apostles to the church. He gave the prophets and those who preach the good news. And he also gave the pastors and teachers as a gift to the church. The principle in this is that if God would give mercy to the chief and greatest sinner of all, it follows a fortiori that He will give mercy to all. A fortiori is a Latin phrase meaning “with stronger reason or more convincing force.” This system of logic is used in drawing a conclusion that is inferred to be even more certain than another. For example, if God would give the greatest, His Son, how much more will He give the lesser, blessings in this life?

Because of the mercy God showed us, we each have the responsibility to be merciful toward each other as we learn in MAT 18:21 (New International Reader’s Version): Peter came to Jesus. He asked, “Lord, how many times should I forgive my brother or sister who sins against me? Up to seven times?” Jesus answered, “I tell you, not seven times, but 77 times. First off, this question illustrates Peter’s ignorance toward true forgiveness and mercy. Because to forgive someone up to seven times means that you must keep count and this would imply that mercy and forgiveness have limitations. To keep a count means that you don’t forget and you’ll bring up the situation again. This means that you really didn’t have forgiveness. God calls on a member of His Kingdom to forgive and act merciful toward others and expects it to be real.

The number seventy-seven represents the unlimited amount of forgiveness and mercy that comes from God! After Peter’s question, Our Lord begins a parable: “The kingdom of heaven is like a king who wanted to collect all the money his servants owed him. As the king began to do it, a man who owed him 10,000 bags of gold was brought to him. (MAT 18:23-24 New International Reader’s Version). This was a considerable amount, especially in that day. The parable continues: The man was not able to pay. So his master gave an order. The man, his wife, his children, and all he owned had to be sold to pay back what he owed. (MAT 18:25 New International Reader’s Version)

It was customary in the ancient world that if someone could not pay what they owed you, you could not only take all of their property and attach it, but you could even take them and their family and sell them all as slaves. The parable continues: “Then the servant fell on his knees in front of him. ‘Give me time,’ he begged. ‘I’ll pay everything back.’ His master felt sorry for him. He forgave him what he owed and let him go.” (MAT 18:26-27 New International Reader’s Version). Notice how the master “felt sorry for him.” This is an expression of a mental attitude saturated with mercy.

But look at what happens next: But then that servant went out and found one of the other servants who owed him 100 silver coins [a mere fraction of what he had owed his master]. He grabbed him and began to choke him. ‘Pay back what you owe me!’ he said. (MAT 18:28 New International Reader’s Version) You see how unreasonable the servant was? How can anyone who is being choked to death pay back the twenty dollars even if he had it in his back pocket? This is a picture of a believer who wants to be treated with mercy by God, but will not be merciful toward others. This man went out from the presence of God and looked for someone who had owed him something. It is when we get our minds off of The Lord that we are in danger of acting like this servant with an unforgiving heart and no mercy. The servant immediately forgot all about the benefits that he received from God when it was time to be like Him.

The Lord Jesus Christ ends His parable like this: “The other servant fell on his knees. ‘Give me time,’ he begged him. ‘I’ll pay it back.’ But the first servant refused. Instead, he went and had the man thrown into prison. The man would be held there until he could pay back what he owed. The other servants saw what had happened and were very angry. They went and told their master everything that had happened. Then the master called the first servant in. ‘You evil servant,’ he said. ‘I forgave all that you owed me because you begged me to. Shouldn’t you have had mercy on the other servant just as I had mercy on you?’ In anger his master handed him over to the jailers. He would be punished until he paid back everything he owed. This is how my Father in heaven will treat each of you unless you forgive your brother or sister from your heart.” (MAT 18:29-35 New International Reader’s Version)

Now read that last line again! And remember that if someone has wronged you and you do not forgive them in your heart, you’re making a huge mistake! However, this is where the principle behind DAN 9:9 (New International Version) comes into focus “The Lord our God is merciful and forgiving, even though we have rebelled against him...” Based on this verse, it’s safe to say that in order to have forgiveness toward others, we’ve got to know Who God is. It is the only way that we can develop a capacity to be merciful.

The public servant portrayed in Our Lord’s Parable would not forgive. He applied the principle of justice without mercy. This is not how God wants us to treat others. Knowing Bible doctrine – and that knowing Who God is and What He Desires – produces mercy in the life of the believer. Look at what the apostle James wrote: But the wisdom from above is first pure, then peaceable, gentle, reasonable, full of mercy… (JAM 3:17 New American Standard Bible) So, we must always have an attitude of mercy toward all members of the human race if we want to walk as true Christians.