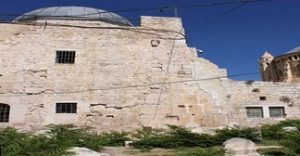 The following verses begin the accounts of the Final Passover meal which took place on the night Our Lord and Savior Jesus Christ was betrayed.

MATT 26:20 (New International Reader’s Version):  When evening came, Jesus was at the table with his 12 disciples.

LUK 22:14 (New International Reader’s Version): When the hour came, Jesus and his apostles took their places at the table.

Mark, Matthew, and Luke were three of the men who sat at the table that night. When they arrived – led by Jesus to the place where the meal would be that evening – everything had been prepared ahead of time. Our Lord had been secretive about where the place would be in order to prevent Judas from any opportunity to betray Him prematurely.

“Where do you want us to prepare for it [the Passover Meal]?” they asked. Jesus replied, “When you enter the city, a man carrying a jar of water will meet you. Follow him to the house he enters. Then say to the owner of the house, ‘The Teacher asks, “Where is the guest room? Where can I eat the Passover meal with my disciples?”’ He will show you a large upstairs room with furniture already in it. Prepare for us to eat there.” (LUKE 22:9–12 New International Reader’s Version)

This two-story stone building atop Mount Zion (pictured above) ranks among the most intriguing sites in Jerusalem. It is traditionally called the Cenacle (from the Latin coenaculum which translates as “dining-room”) and you will find it today just outside the present-day Old City walls to the south. The building’s lower story has been associated since the Middle Ages with the Tomb of David, the purported burial place of the Biblical King, while the upper story — often referred to as the “Upper Room”— is traditionally believed to be the place of the Last Supper.

As was the custom at that time and place, during the meal, they reclined on couches at a low table instead of sitting at a table as portrayed in DaVinci’s painting. The table would have been in the center with Jesus and the disciples arranged in a horseshoe manner with one end of the table left open for the servants to be able to serve the food. We believe that John is at the first position on the left with Jesus next, then Judas in the place of honor, then the other disciples around the table, finishing with Peter at the last place on the right. This arrangement accounts for the various conversations that take place during the meal.

The exact timetable of all that takes place during this Passover meal is uncertain, but what takes place is not. The apostle John gives us by far the most detailed account, but he does not specifically mention the Communion which is covered by all three of the synoptic gospels. Some chronology we can figure out from the normal course of events at a Passover meal. The meal starts with a cup of red wine mixed with a double portion of water. A prayer of thanksgiving is offered along with the cup. It could be at this point that Jesus says what is recorded in LUK 22:14-16 (The Message Bible): When it was time, he sat down, all the apostles with him, and said, “You’ve no idea how much I have looked forward to eating this Passover meal with you before I enter my time of suffering. It’s the last one I’ll eat until we all eat it together in the kingdom of God.”

Everything that Jesus Christ came to earth to accomplish will be fulfilled over the next few days and though He will have to endure the suffering of The Cross, He sees beyond that to the future Kingdom of God which is described in HEB 12:1-3 (The Message Bible): Do you see what this means—all these pioneers who blazed the way, all these veterans cheering us on? It means we’d better get on with it. Strip down, start running—and never quit! No extra spiritual fat, no parasitic sins. Keep your eyes on Jesus, who both began and finished this race we’re in. Study how he did it. Because he never lost sight of where he was headed—that exhilarating finish in and with God—he could put up with anything along the way: Cross, shame, whatever. And now he’s there, in the place of honor, right alongside God. When you find yourselves flagging in your faith, go over that story again, item by item, that long litany of hostility he plowed through. That will shoot adrenaline into your souls! That is why He earnestly wanted to eat the Passover meal with them.

Sadly, the meal eventually takes an uncomfortable turn as we learn in LUK 22:24–30. The Message Bible translation subtitles these verses with Get Ready For Trouble. The verses tell us that: Within minutes they were bickering over who of them would end up the greatest. But Jesus intervened: “Kings like to throw their weight around and people in authority like to give themselves fancy titles. It’s not going to be that way with you. Let the senior among you become like the junior; let the leader act the part of the servant. Who would you rather be: the one who eats the dinner or the one who serves the dinner? You’d rather eat and be served, right? But I’ve taken my place among you as the one who serves. And you’ve stuck with me through thick and thin. Now I confer on you the royal authority my Father conferred on me so you can eat and drink at my table in my kingdom and be strengthened as you take up responsibilities among the congregations of God’s people.”

Now, this was not the first time they had had this argument with each other. They argued about this during Jesus’ Galilean Ministry at which time Our Lord said to them, “So you want first place? Then take the last place. Be the servant of all. (MAR 9:35 The Message Bible)” He then pointed them to a child as an example of humble trust and greatness.

On the way to Jerusalem, James and John had their mother approach Jesus about being seated on His left and right in the kingdom. The other disciples became indignant when they heard about it, and Jesus had to rebuke them all teaching again that “… anyone who wants to be important among you must be your servant. And anyone who wants to be first must be the slave of everyone. Even the Son of Man did not come to be served. Instead, he came to serve others. He came to give his life as the price for setting many people free.” (MAR 10:43-45 New International Reader's Version)

But despite these two episodes, the apostles had not yet learned this lesson because they began arguing again about who was the greatest among them at the Final Passover. What blatant selfishness! Just the day before, Jesus said He would be crucified after two days and He had just said this was His final Passover with them until it would be fulfilled in the Kingdom of God. Perhaps it was this mentioning of the coming of the Kingdom of God that prompted their arguing again, but they should have known better. So Jesus will have to reprimand them again in both word and deed. Look at LUK 22:24-30 (The Message Bible): Within minutes they were bickering over who of them would end up the greatest. But Jesus intervened: “Kings like to throw their weight around and people in authority like to give themselves fancy titles. It’s not going to be that way with you. Let the senior among you become like the junior; let the leader act the part of the servant. Who would you rather be: the one who eats the dinner or the one who serves the dinner? You’d rather eat and be served, right? But I’ve taken my place among you as the one who serves. And you’ve stuck with me through thick and thin. Now I confer on you the royal authority my Father conferred on me so you can eat and drink at my table in my kingdom and be strengthened as you take up responsibilities among the congregations of God’s people.”

This is very close to the same reprimand that The Lord Jesus Christ gave them only about a week earlier when they were on the road to Jerusalem and approaching Jericho. The point here is that God’s Kingdom is radically different because greatness is directly tied to trusting God to serve Him and do His Will. Greatness boils down to a simple matter of faithfulness to God to do whatever He calls you to do whether great or small in the eyes of man.

It is not your particular gift, ministry or your ministry’s size that determines success in God’s Eyes. It’s your faithfulness to Him in using your gifts and having diligence in ministry, utilizing The Power of The Holy Spirit. It is God who gives you the gift, the ministry and empowers all as He desires. True greatness is marked by humility to simply trust God and serve Him however, wherever and whenever He desires you to, to the best of your ability.

It isn’t surprising that Jesus rebuked the apostles for their blatant selfish ambition, but it is surprising that He so quickly assures them that they will be granted a place at His table in the kingdom and will be rulers within it. He commends them for staying by Him in His Trials even knowing that they will run away from Him that very night in fear of also being arrested. It is Jesus Christ’s Nature to see beyond present failures to future successes. The apostles would be faithful in the future even though they would be failures that night. He sees us the same way, and that is a great source of encouragement. He is faithful to continue to His good work in you so that you will reach perfection on the day of His Return. Paul teaches us this in PHIL 1:6 (New International Reader’s Version): God began a good work in you. And I am sure that he will carry it on until it is completed. That will be on the day Christ Jesus returns.