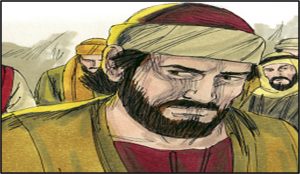 Let’s start this week’s Teen Tree with a statement which Our Lord Jesus Christ made in JOH 13:17 (New American Standard Bible): If you know these things, you are blessed if you do them. The condition of blessing is twofold. You must know these things and then you must do them. Note that the words “things” and “them” are plural. If He were only referring to washing feet, then it would be singular and only pointing to one action. The blessings come first from knowing the lessons that Our Lord just taught. The “things” He was referring to include: 1) That He is the Teacher and The Lord; 2) That the servant is not above the master, and 3) That even The Teacher and Lord is humble to do the slave’s work. Knowledge is not enough. You must take action and put into practice The Lord Jesus Christ’s example of humility and serve one another. Or to state this very concisely, the practice of humble service brings blessing.

Included, too, are the duties they owed to Him, and one another; love and respect to each other; and the humility, condescension, and brotherly love, which ought to be in them, and of which He had given them many examples.

The word “blessed” in JOH 13:17 is the same word used in The Beatitudes in MATTHEW 5:3-12. It comes from the Greek word makarios, which means to be happy or blissful. But it is a self-contained happiness, meaning it is independent of our circumstances. By self-contained, it means that regardless of what is happening to us externally, we can be truly happy internally. It is this blessedness that allows the Christian to be at peace and even experience joy in the midst of difficult circumstances. This leaves the world confused about us! The world does not understand our reactions because they do not understand our identity as slaves of Christ and servants of one another.

The next passage describes how Our Lord and Savior began to teach His disciples how to plan for the immediate future: “I am not talking about all of you. I know the ones I have chosen. But this will happen so that this passage of Scripture will come true. It says, ‘The one who shared my bread has turned against me.’ (Psalm 41:9) I am telling you now, before it happens. When it does happen, you will believe that I am who I am. What I’m about to tell you is true. Anyone who accepts someone I send accepts me. And anyone who accepts me accepts the one who sent me.” (JOH 13:18-20 New International Reader’s Version) Notice that He explains that there is blessing for those that follow His Example, but not everyone there that evening would be blessed because one of them did not follow His Example.

Jesus had already said to Peter that not all of the disciples were clean. Now He adds to this that not all of them were chosen, but that one of them would be fulfilling the Scriptures. Jesus quotes PSA 41:9: “The one who shared my bread has turned against me.” This quote is David’s lament over the treachery of his once trusted counselor, Ahithophel. One of the disciples would be a traitor to Jesus just like Ahithophel was to David.

The Lord Jesus Christ also explains to the disciples that He is giving them this information in advance so that they would not be shaken in their trust of Him and would continue to believe. We have to put ourselves in their shoes if we are to understand the importance of Our Lord’s revelation here. The disciples didn’t understand what was about to happen. They were still looking for Jesus Christ to fulfill all the prophecies concerning The Messiah which included reigning on the throne of David. They did not understand that those prophecies would not be fulfilled until a later time and that The Messiah would first have to become The Atonement for their sins. Even though Jesus had been warning them for some time about what was about to happen to Him in Jerusalem, they still resisted the idea. MATT 16:21 (New International Reader’s Version) tells us how He warned them: From that time on Jesus began to explain to his disciples what would happen to him. He told them he must go to Jerusalem. There he must suffer many things from the elders, the chief priests and the teachers of the law. He must be killed and on the third day rise to life again. But even when Jesus was arrested, Peter grabbed a sword and started swinging in His Defense until Jesus stopped him.

By telling the disciples beforehand that He was going to be betrayed, Jesus eliminates any idea that He was a victim in the tragedy that was about to play out. By showing His Omniscience, He also assures them of His Sovereignty. They will still be able to believe in Him without reservation. He also adds to their confidence by reminding them Who it was that would be sending Him. Jesus Christ will remain The Messiah who was sent by The Father, so that anyone receiving Him receives The Father. In the same way, those that will receive Whomever The Son sends out, will receive Jesus.

Now we’ll look at His Prediction of Betrayal which is found in MATT 26:21-25 (New International Reader’s Version): While they were eating, he said, “What I’m about to tell you is true. One of you will hand me over to my enemies.” The disciples became very sad. One after the other, they began to say to him, “Surely you don’t mean me, Lord, do you?” Jesus replied, “The one who has dipped his hand into the bowl with me will hand me over. The Son of Man will go just as it is written about him. But how terrible it will be for the one who hands over the Son of Man! It would be better for him if he had not been born.” Judas was the one who was going to hand him over. He said, “Surely you don’t mean me, Teacher, do you?”

One portion of the Passover meal involved eating bitter herbs from a bowl as a symbol of the bitter bondage the Jews had in Egypt. The herbs were accompanied by a thick mixture of ground raisins, dates, nuts, and apples called, “charoseth” as a reminder of the mud they had used to make bricks. It is in connection with this that Jesus brings up a bitter truth. JOH 13:21 (New American Standard Bible) also includes The Lord Jesus Christ’s Prediction of Betrayal: When Jesus had said these things, He became troubled in spirit, and testified and said, “Truly, truly I say to you that one of you will betray Me.”

Our Savior’s Own Spirit was troubled, disturbed, agitated. The word here is used for water that has been stirred up. It bothered Jesus terribly that one of them would betray Him. Jesus “testifies” this in His Statement. This is a solemn affirmation about what He knew was already true. His repetition of “truly, truly” emphasizes the nature of what He is saying as a statement of fact and not speculation.

The disciples are shocked at this statement as we learn in JOH 13:22-25 (The Message Bible): The disciples looked around at one another, wondering who on earth he was talking about. One of the disciples, the one Jesus loved dearly, was reclining against him, his head on his shoulder. Peter motioned to him to ask who Jesus might be talking about. So, being the closest, he said, “Master, who?”

MATT 26:22 (The Message Bible) describes them as being “stunned.” Jesus had been telling them that He would suffer and be killed and they knew the religious leaders were seeking to kill Him, but they were astonished to learn that one of them would be a traitor. They had been together for two years and experienced many things together. How could one of them who was now sharing the Passover meal with Jesus Christ also be a traitor? Sharing such a meal together was a great mark of friendship so this compounded the betrayal that would take place. Understandably then, each was grieved.

Our Lord did not relieve their personal fears. He simply pointed out who it was as we read earlier in MATT 26: “The one who has dipped his hand into the bowl with me will hand me over.” The problem was that it could be any of them since they were all sharing in the same meal. Jesus would be betrayed, but that would not obstruct God’s Plan. God The Father would use it just as it had been prophesied. However, Jesus does give His betrayer a stern and sobering warning. Betrayal is cruel, yet Jesus still had the compassion to warn him. No earthly gain could compensate for an end so horrible that it would be better to have never existed.

Incredibly, Judas’ ignores the warning and in brazen insolence responds: “Surely you don’t mean me, Teacher, do you?” MATT 26:25 (New International Reader’s Version) Interestingly, Judas uses a term of respect for The Lord Jesus Christ when he calls him “Teacher” but does not call Him “Lord” as all the other disciples did. Jesus affirms that Judas is the betrayer saying, “You have said so.” MATT 26:25 (New International Reader’s Version) Because Judas was next to Our Savior, the other disciples did not hear what He had said. And the disciples remained at a loss as to whom it could be. LUKE 22:23 (The Message Bible) describes their behavior like this: They immediately became suspicious of each other and began quizzing one another, wondering who might be about to do this. For eleven of them, there was a sincere and humble admission in asking if it could be him? Could he somehow be ignorantly responsible for such a horrendous action as betraying the Lord? For Judas, it was a question of utmost hypocrisy.