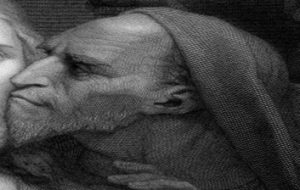 We left off last week with the reaction of the disciples to Our Lord and Savior’s statement that one of them would betray Him: “What I’m about to tell you is true. One of you will hand me over to my enemies.” (MATT 26:21-25 New International Reader’s Version) As you can imagine, all but one of the disciples were at a loss as to which one of them it could be. LUKE 22:23 (The Message Bible) describes their behavior, following his statement: They immediately became suspicious of each other and began quizzing one another, wondering who might be about to do this. For eleven of them, there was a sincere and humble admission in asking if it could be him. Could he somehow be ignorantly responsible for such a horrendous action as betraying Jesus Christ? Which one of those He trusted so much, over this time, could be the one?

As we learned, Judas’ question was one of utmost hypocrisy. But the other disciples reacted differently. Peter wanted to know more, so he got John’s attention because he sat the closest to Jesus. This is described in JOH 13:22-25 (The Message Bible): One of the disciples, the one Jesus loved dearly, was reclining against him, his head on his shoulder. Peter motioned to him to ask who Jesus might be talking about. So, being the closest, he said, “Master, who?” We should note here that John was always struck by the fact that Jesus loved him and so he referred to himself by that fact, rather than use his own name. This is not arrogance on John’s part, but rather his glorying in the wonder of Christ’s Love for him.

We don’t know exactly where Peter is situated at the table with respect to where John is seated, but it’s far enough away that he has to gesture to get John’s attention. But he’s close enough that he can talk with him without the others hearing clearly what is being said. A likely place would be John and Peter are across the table from each other at either end of the “U” seating arrangement.

Like the others, John is curious and asks, “Master, who?” They are reclining on couches with their heads toward the table. Most people would lie on their left side and eat with their right hand, so all John had to do was lean back slightly and whisper to Our Lord. That is what is meant that John “was reclining against him.”

The Lord Jesus Christ responds to John in this way: “The one to whom I give this crust of bread after I’ve dipped it.” Then he dipped the crust and gave it to Judas, son of Simon the Iscariot. As soon as the bread was in his hand, Satan entered him. (JOH 13:26-27 The Message Bible) The bread mentioned in this verse is a piece of flat bread – the matzoh cracker – that would be dipped into either a bowl filled with bitter herbs, vinegar and salt or one containing mashed fruit. Judas was already in the place of honor on Jesus’ left side and it was an additional honor to receive the dipped morsel.

As an aside, it’s difficult imagining that Judas would not have heard what John said and what The Lord Jesus Christ said in return. Perhaps Our Lord’s method of identifying Judas to John was a way to let Judas know that He was fully aware of what Judas was planning to do. Interesting that in doing this, Jesus set it up so that Judas was about to betray The One Who was feeding him with His Own Hand!

When we read that “Satan entered him,” we can be certain that there would be no turning back for Judas. Satan had previously put it into Judas’ heart to betray The Lord Jesus Christ in JOH 13:2 (New International Reader’s Version): The devil had already tempted Judas, son of Simon Iscariot. He had urged Judas to hand Jesus over to his enemies. And now Judas gives himself over to Satanic control because the devil can only enter into a person who will not submit to God and resists him: So obey God. Stand up to the devil. He will run away from you. (JAM 4:7 New International Reader’s Version). Judas would not heed The Lord Jesus Christ’s warnings and he would not resist Satan any longer. He was now committed to Satan’s evil plot.

But know this: Satan was in control of Judas, but he was not in control of the situation. Even here we find that it’s Jesus Christ that does the commanding. He tells Judas to be quick about what he is about to do. Jesus would be betrayed and crucified in God’s Timing. Judas would be the tragic fulfillment of the ancient prophecies.

JOH 13:28-30 (New International Reader’s Version) continues: So Jesus told him, “Do quickly what you are going to do.” But no one at the meal understood why Jesus said this to him. Judas was in charge of the money. So some of the disciples thought Jesus was telling him to buy what was needed for the feast. Others thought Jesus was talking about giving something to poor people. As soon as Judas had taken the bread, he went out. And it was night. Judas left immediately with his heart filled with Satan. John’s comment that “it was night” reminds us that it is often under the cloak of darkness that evil people perform their evil deeds. The blackness of the night would match the darkness that was now in Judas’ heart.

The Gospels of Mark, Matthew, Luke, and John, and The Book of Acts all tell the tale of Judas Iscariot’s betrayal. They do not specify much else about the man himself, i.e., where he was born, or who his family was. But all accounts agree that Judas, once a trusted follower of Jesus Christ, for some reason or other turned Him over to the authorities in exchange for a cash reward: That is when one of the Twelve, the one named Judas Iscariot, went to the cabal of high priests and said, “What will you give me if I hand him over to you?” They settled on thirty silver pieces. He began looking for just the right moment to hand him over. (MATT 26:14-16 The Message Bible)

The plan was that Judas was to point out Jesus to the Roman authorities by kissing him. The four Gospels don’t explain why exactly Judas had to kiss Jesus in order to identify him, but a 1,200-year-old Egyptian text translated in 2013 suggests he had to do so because Jesus was known to be able to change His Physical Form at will and was therefore difficult to distinguish.

All four Gospels describe Judas as some form of evil. Even his surname, “Iscariot,” is viewed by some historians as a bastardization of the Latin word “sicarius,” meaning “murderer.” By some accounts, Judas was overcome with the spirit of the Devil, in others, he was already known to be a treacherous man by nature. According to John, though Judas was the treasurer of the apostles, he was also known to be a thief, and as keeper of the money bag, he was used to helping himself to what was put into it.

But Iscariot was nonetheless a trusted apostle for some reason. Even Jesus’ most prominent followers, like Matthias, acknowledged that Judas “was one of our number and shared in our ministry.” Indeed, Judas must have felt some kinship for his master, as after he turned Jesus over to the authorities, as it’s written in Matthew, he was so overcome with guilt that he abandoned the cash reward and hanged himself.

According to The Book of Acts, Judas’ suicide was even more pathetic: “As you know, [Judas] took the evil bribe money and bought a small farm. There he came to a bad end, rupturing his belly and spilling his guts. Everybody in Jerusalem knows this by now; they call the place Murder Meadow. It’s exactly what we find written in the Psalms: Let his farm become haunted so no one can ever live there. And also what was written later: Let someone else take over his post.”

Man is innately proud and seeks for himself. Judas was the epitome of this. Jesus is innately gracious and redeems man and makes those who will humble themselves to believe in Him into new creations in Him. Every person must choose whether they will follow God or self. All attempts to do both result in an internal conflict which eventually forces a choice. Those who choose self will descend into greater sin. Believers who choose self will be humbled by God. Those who choose God make steps toward belief and salvation if they are not Christians – and towards God’s Glory and greater personal holiness if they are believers. Eleven of the disciples followed Christ and were blessed. One – Judas – chose self and was cursed.