Teen Tree of Life – The God of ALL Comfort – Part 2 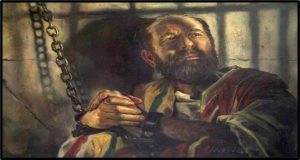 The God of All Comfort - Part 2

As we continue in our study of God’s Comfort, we’re going to look at suffering, comfort, and endurance. Our Perfect Example in this is The Lord Jesus Christ. The pain that He suffered is something we should expect in our own lives since He gave so many warnings about it. The focus of these warnings is usually that the world will hate us because it hated Him and so we will be persecuted for Righteousness and His Name’s Sake. Look at what Our Lord said in MATT 5:10-12 (The Message Bible): “You’re blessed when your commitment to God provokes persecution. The persecution drives you even deeper into God’s kingdom. Not only that—count yourselves blessed every time people put you down or throw you out or speak lies about you to discredit me. What it means is that the truth is too close for comfort and they are uncomfortable. You can be glad when that happens—give a cheer, even!—for though they don’t like it, I do! And all heaven applauds. And know that you are in good company. My prophets and witnesses have always gotten into this kind of trouble.”

It’s important to keep in mind that The Lord Jesus Christ would also suffer the more common things that are part of living as a human in this sin-cursed world. Look at HEB 4:15 (New International Reader’s Version): We have a high priest who can feel it when we are weak and hurting. We have a high priest who has been tempted in every way, just as we are. But he did not sin. Jesus was tempted in the same things we are, yet He never sinned. It’s also safe to say that He also suffered pain in all points as we do and yet endured and overcame. There is no record of Him getting sick or even having a cold, so that is a point that currently remains a mystery to us. But we do know that He became hungry (MATT 4:2); thirsty (JOH 19:28); homeless (MATT 8:20); weary (JOH 4:6); exhausted (MATT 8:23); angry and grieved (MARK 3:5); and filled with sorrow and even weeping because of the death of His friend, Lazarus (JOH 11).

As for physical pain, Jesus Christ knew in advance the torture He would have to endure at the hands of His enemies including being beaten, flogged and crucified. Our Savior would also suffer the emotional anguish of rejection that we cannot begin to imagine – including leaving Heaven to become a man to save mankind – and still seeing His Own people refuse to accept Him: He came to what was his own. But his own people did not accept him. (JOHN 1:11 New International Reader’s Version) And He would also endure the worst pain of all when His Heavenly Father would forsake Him as He bore the sins of the world: And about the ninth hour Jesus cried out with a loud voice, saying, “Eli, Eli, lema sabaktanei?” that is, “My God, My God, why have You forsaken Me?” (MATT 27:46 New American Standard Bible)

In 2 COR 1:5 (New International Reader’s Version), the apostle Paul writes: We share very much in the sufferings of Christ. So we also share very much in his comfort. Notice how Paul adds, “we also share very much in his comfort.” How can He say that? Because all that Jesus Christ went through as a man makes Him The Perfect High Priest for us. This is because He sympathizes with our weaknesses. That is why we can draw near to The Throne of Grace and know that from Him we will receive Mercy and find Comfort to help in time of need. The comfort, encouragement and consolation we will need during life, will come through our Gracious High Priest who knows and understands us. That should give you great hope and happiness!

Now look at 2 COR 1:6-7 (New International Reader’s Version): If we are having trouble, it is so that you will be comforted and renewed. If we are comforted, it is so that you will be comforted. Then you will be able to put up with the same suffering we have gone through. Our hope for you remains firm. We know that you suffer just as we do. In the same way, God comforts you just as he comforts us.. In these verses, Paul makes all of this personal because the afflictions that he and his missionary team had gone through came out of their work of sharing The Gospel and then strengthening the Corinthians in the faith. At the same time, the encouragement Paul and his companions received, from seeing them come to Christ and grow in their faith, enabled them to endure the afflictions they suffered. It would then become mutual because those disciples would become like their teachers and suffer as they furthered the cause of Christ. And much like the disciples in ACTS 5:40-41 (New International Reader’s Version), they would rejoice for suffering for His Name’s Sake: They called the apostles in and had them whipped. The leaders ordered them not to speak in Jesus’ name. Then they let the apostles go. The apostles were full of joy as they left the Sanhedrin. They considered it an honor to suffer shame for the name of Jesus.

Paul makes this even more personal in 2 COR 1:8-10 (New International Reader’s Version): Brothers and sisters, we want you to know about the hard times we had in Asia Minor. We were having a lot of trouble. It was far more than we could stand. We even thought we were going to die. In fact, we felt as if we were under the sentence of death. But that happened so that we would not depend on ourselves but on God. He raises the dead to life. God has saved us from deadly dangers. And he will continue to do it. We have put our hope in him. He will continue to save us. Paul is reminding them of what he and the other missionaries had gone through in bringing them The Gospel and teaching them about God and His Ways. Paul goes into more detail about these in 2 COR 11:23–27 (New International Reader’s Version): Are they serving Christ? I am serving him even more. I’m out of my mind to talk like this! I have worked much harder. I have been in prison more often. I have suffered terrible beatings. Again and again I almost died. Five times the Jews gave me 39 strokes with a whip. Three times I was beaten with sticks. Once they tried to kill me by throwing stones at me. Three times I was shipwrecked. I spent a night and a day in the open sea. I have had to keep on the move. I have been in danger from rivers. I have been in danger from robbers. I have been in danger from my fellow Jews and in danger from Gentiles. I have been in danger in the city, in the country, and at sea. I have been in danger from people who pretended they were believers. I have worked very hard. Often I have gone without sleep. I have been hungry and thirsty. Often I have gone without food. I have been cold and naked.

Though Paul had suffered so much, his confidence was stronger than ever because he had experienced the Lord’s Deliverance and Comfort so many times. That is why his hope was so firmly fixed and he could encourage them in the same way. That takes us back to Paul’s opening statement that the comfort he had received from “God, and the Father of Jesus Christ, the Father of Mercies and God of all Comfort,” he could extend to them because of his own experiences. His great trust in God in the midst of tribulation could encourage and console them in the midst of whatever affliction they were experiencing.

Paul ends this section with an emphasis on the importance of prayer: 2 COR 1:8-10 (New International Reader’s Version): You must help us by praying for us. Then many people will give thanks because of what will happen to us. They will thank God for his kindness to us in answer to the prayers of many. Paul clearly recognized that they were helped by the prayers of the Corinthians on their behalf, and that such prayer increased the thanksgiving to God as they would learn how God answered those prayers. Keep that in mind as you pray for others. You become part of what God is doing in their lives and so are able to personally rejoice in what The Lord does in response.