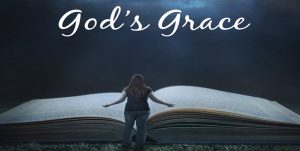 In summary, Grace is all that God is free to do for mankind without compromising His Divine Essence. Grace implies favor, kindness, and mercy. Grace is free, unmerited love and favor from God alone, not as a result of our human works or because we are attractive to Him. Grace is that which is in God which acts freely to save and bless mankind because all demands of holiness have been satisfied by The Lord Jesus Christ.

We suffer as a direct result of our own sin, other people’s sins and living in a sin-cursed world. Each of us is in need of God’s Grace in overcoming the suffering that is part of this life. More importantly, every person is in need of God’s Grace in order to receive a guarantee that Heaven, along with its glories and blessings, will be our eternal home – instead of eternal punishment in everlasting Hell. No one can earn God’s Grace. It can only be received as a gift from Him by faith in His Character and Promises and belief in His Son as Our Savior. God has demonstrated His Character and His Faithfulness to His promises throughout history. Let’s take a look at a few of these.

We’ll start with GEN 6:5-8 (New King James Version): Then the Lord saw that the wickedness of man was great in the earth, and that every intent of the thoughts of his heart was only evil continually. And the Lord was sorry that He had made man on the earth, and He was grieved in His heart. So the Lord said, “I will destroy man whom I have created from the face of the earth, both man and beast, creeping thing and birds of the air, for I am sorry that I have made them.” But Noah found grace in the eyes of the Lord. In His Grace, God instructs Noah on how to survive the coming flood by building an ark. This is more than just the Mercy of sparing his life from the flood; it is Grace that also extended to his family and a remnant of all air-breathing land animals so that they could eventually restore and replenish life on the earth.

Exodus records God’s rescue of Israel from slavery in Egypt, but beyond the Mercy shown in their escape by God’s mighty hand, it was His Grace that sustained them in the wilderness. Look at EX 33:17(New King James Version): So the Lord said to Moses, “I will also do this thing that you have spoken; for you have found grace in My sight, and I know you by name.” This is in response to Moses’ pleading for Yahweh to go with them and lead them. And out of His Grace, God went with them.

Jeremiah records the siege and fall of Jerusalem. In JER 31:2 (New King James Version) he writes: This is what the Lord says: “The people who survived the sword found grace in the wilderness—Israel, when it went to find its rest.” God’s Grace was extended to those that survived the destruction of Jerusalem, and they would be restored in a future time.

God’s Grace is also seen in His Promise of a future restoration of the Davidic Kingdom which includes the actions of The Spirit of Grace: “I will pour out a spirit of grace and prayer on David’s family line. I will also send it on those who live in Jerusalem. They will look to me. I am the one they have pierced. They will mourn over me as someone mourns over an only child who has died. They will be full of sorrow over me. Their sorrow will be just like someone’s sorrow over an oldest son.” (ZEC 12:10 New International Reader’s Version)

PROV 3:33–34 (New American Standard Bible) gives a general statement about the need for God’s Grace and His Dispensing of it. It tells us: The curse of the Lord is on the house of the wicked, But He blesses the home of the righteous. Though He scoffs at the scoffers, Yet He gives grace to the needy.

JAM 4:6 (New International Reader’s Version) tells us this about God’s Grace: But God continues to give us more grace. That’s why Scripture says, “God opposes those who are proud. But he gives grace to those who are humble.”

1 PET 5:5 (New International Reader’s Version) expresses the same idea: In the same way, I’m speaking to you who are younger. Follow the lead of those who are older. All of you, put on a spirit free of pride toward one another. Put it on as if it were your clothes. Do this because Scripture says, “God opposes those who are proud. But he gives grace to those who are humble.”

In keeping with this same premise, PSA 84:11 (New American Standard Bible) expresses God’s Blessing upon those who stay in His Plan: For the Lord God is a sun and shield; The Lord gives grace and glory; He withholds no good thing from those who walk with integrity. An important thing to note is that being righteous doesn’t earn God’s Favor but it does put you in a better position to receive it.

Let’s look more closely at that idea since it is commonly believed that keeping God’s Law, or performing some form of works, is the means of gaining God’s Grace and Salvation. ISA 64:6 (New International Reader’s Version) tells us that: All of us have become like someone who is “unclean.” All the good things we do are like dirty rags to you. All of us are like leaves that have dried up. Our sins sweep us away like the wind. God’s Law only exposes sin in failing to keep or follow it which in turn proclaims the need for God’s Mercy and Grace.

Now we’re going to look at Grace and Salvation. There are those that believe that the means of Salvation changed from keeping God’s Law in the Old Testament to Grace in the New Testament, but that is not true. Paul says it all in GALATIANS 2:19-21 (The Message Bible): What actually took place is this: I tried keeping rules and working my head off to please God, [when He was a Pharisee] and it didn’t work. So I quit being a “law man” so that I could be God’s man. Christ’s life showed me how, and enabled me to do it. I identified myself completely with him. Indeed, I have been crucified with Christ. My ego is no longer central. It is no longer important that I appear righteous before you or have your good opinion, and I am no longer driven to impress God. Christ lives in me. The life you see me living is not “mine,” but it is lived by faith in the Son of God, who loved me and gave himself for me. I am not going to go back on that. Is it not clear to you that to go back to that old rule-keeping, peer-pleasing religion would be an abandonment of everything personal and free in my relationship with God? I refuse to do that, to repudiate God’s grace. If a living relationship with God could come by rule-keeping, then Christ died unnecessarily.

Think about that great commandment from DEUT 6:5 (New International Reader’s Version): Love the Lord your God with all your heart and with all your soul. Love him with all your strength. Those who love God will demonstrate their love for Him in their actions toward Him which includes obedience to His Commands as well as fearing Him, walking with Him, and serving Him. However, obedience cannot be successfully accomplished without love for God. That was the problem with the Pharisees then and it’s still a problem among legalists and those pursuing a works righteousness program today.

Salvation is and always has always been by God’s Grace through faith in The Lord Jesus Christ. Prior to the Death and Resurrection of Jesus Christ, it was faith in what God would do in bringing about redemption of sinful man. That hope began in GEN 3:14-15 (The Message Bible) in the promise of a future seed of the woman that would crush the serpent’s head: God told the serpent: “Because you’ve done this, you’re cursed, cursed beyond all cattle and wild animals, Cursed to slink on your belly and eat dirt all your life. I’m declaring war between you and the Woman, between your offspring and hers. He’ll wound your head, you’ll wound his heel.” (As a side note, the seed of the serpent would bruise the heel of the seed of the woman. Satan bruised the heel of Christ on The Cross, causing His physical death. Bruising suggests something that was not ultimate or final. Christ died on our behalf, being made sin for us. He bore our judgment upon Calvary's Cross and, in doing so, bruised His heel. Though wounded, the damage done to Jesus was not final because He came back from the dead three days later.)

With respect to what God said to the serpent in GEN 3:14-15 (above), His Grace was extended to Adam and the woman and their descendants from that moment on. They trusted God as they looked forward to His Provision of the Perfect Redeemer. After the Resurrection of Christ, faith has been in what God has already done through Him to redeem us. We look back on what Christ has done and trust Him for the present and the fulfillment of His future promises.

The Grace of God abounds and it offers Salvation and all its blessing to whosoever will believe in The Lord Jesus Christ: Then everyone who believes may have eternal life in him. God so loved the world that he gave his one and only Son. Anyone who believes in him will not die but will have eternal life. (JOH 3:15-16 New International Reader’s Version) If you have already received this Grace of God, then rejoice and proclaim it to others that they may receive it too!