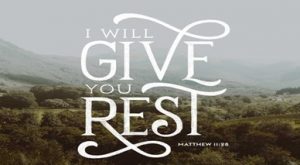 We learned last week that the first prerequisite of receiving Our Savior’s Offer of Rest in MATT 11:25-30 is that although the offer is universal, only the humble of heart will hear and understand the offer being made. The second prerequisite to The Lord Jesus Christ’s Offer of Rest is revelation. This is taught in MATT 11:27 (New International Reader’s Version): “My Father has given all things to me. The Father is the only one who knows the Son. And the only ones who know the Father are the Son and those to whom the Son chooses to make him known.” This verse reveals the Unique Relationship between God The Father and God The Son. It should remove all pride from anyone seeking God. Think of how important that is. Arrogant people cannot have a relationship with God. This means that an important goal is to stay humble in all we do and think.

Many other passages make it clear that God has revealed Himself enough through creation itself so that all are accountable to Him without excuse. To say this in an easier way is that God has given us a great deal of information about what He has done and Who He is and in doing so, we should know that we must be accountable to Him.

The Lord Jesus Christ’s Teachings were declared openly then and are freely available to everyone now as a result of the Bible. The problem is not that God’s Revelation is hidden, because it’s hidden out in the open where anyone can examine it. The problem is that people don’t make the choice to seek a relationship with Him by studying His Word under a prepared Pastor-Teacher.

HEB 11:6 (New International Reader’s Version), among other passages, declares that God will reward those that believe and diligently seek after Him: Without faith [believe] it is impossible to please God. Those who come to God [seek] must believe that he exists. And they must believe that he rewards those who look to him. The problem is that man’s pride blinds him to seeing what’s in front of him. Look at what Paul wrote it in ROM 1:22 (New International Reader’s Version): They claimed to be wise. But they made fools of themselves. Paul also wrote: There is no one who understands; there is no one who seeks God. (ROM 3:11 Christian Standard Bible)

So, who is it that The Lord Jesus Christ chooses to reveal the truth to? He said in MATT 11:25 that it was to “little children” – meaning those who are humble. Simply said, Jesus Christ is more than willing to reveal The Father to those who humbly come seeking Him, but the truth will remain hidden from those who are arrogant (proud).

In the next verses of MATT 11, The Lord Jesus Christ describes His Offer and its reward: Come to me, all you who are tired and are carrying heavy loads. I will give you rest. Become my servants and learn from me. I am gentle and free of pride. You will find rest for your souls. Serving me is easy, and my load is light.” (MATT 11:28-30 New International Reader’s Version) Those who are humble will respond to Our Savior’s Offer. His Offer is a call to all who are “tired and are carrying heavy loads” to come to Him. Such a call involves a change in direction – and a change in life! In a word, it involves repentance. John Bunyan illustrated this well in “Pilgrim’s Progress.” Pilgrim is walking the trail with a huge pack on his back. He is indeed weary and heavy-laden! Suddenly he hears a voice telling him to come over if he wants to be released from the burden he is carrying.

In order for Pilgrim to respond to the call, he must listen to and follow the call. If Pilgrim had been arrogant to the point that he was preoccupied with his own plans to get rid of his burden, he would not have paid attention to the call. If he heard the call, but remained proud, convinced that his own plans were better, he would continue on his journey according to his own wisdom, with the burden still firmly attached to his back. He had to be humble to listen to and follow the call. He had to recognize that he needed help to get the burden off his back because only then would he step off his current path and walk in a new direction, according to what the call advised.

The first thing we should be aware of about the nature of the Offer of Rest that The Lord Jesus Christ is making is that it is a call. His Offer will not do you any good unless you follow it. If you want rest from your burden, then you must be humble enough to respond to the call being given.

But what is this heavy-burden that makes man so weary? It is his efforts to deal with his sin problem by his own means and methods. Sin is a heavy burden to begin with. It’s compounded when we try to take care of that sin ourselves. We are completely incapable of dealing with it on our own and will only make the problem worse. The most we can do is trade one sinful attitude and practice for another deemed more acceptable to ourselves or society. The sin may not present itself as obnoxiously as before, but it’s still present, so there it hasn’t been taken care of.

A “cure” of sin is only accomplished when the person in both action and attitude does what God desires of him. The efforts of the Jewish religious leaders of Jesus’ time only made the burden of sin heavier. Our Lord described this specifically in MATT 23:4 (The Message Bible): “Instead of giving you God’s Law as food and drink by which you can banquet on God, they package it in bundles of rules, loading you down like pack animals. They seem to take pleasure in watching you stagger under these loads, and wouldn’t think of lifting a finger to help. Their lives are perpetual fashion shows, embroidered prayer shawls one day and flowery prayers the next. They love to sit at the head table at church dinners, basking in the most prominent positions, preening in the radiance of public flattery, receiving honorary degrees, and getting called ‘Doctor’ and ‘Reverend.” Can you see how this describes not only their arrogance, but also their lack of love for their fellow man?

Peter also describes this in ACTS 15:10-11 (The Message Bible): “So why are you now trying to out-god God, loading these new believers down with rules that crushed our ancestors and crushed us, too? Don’t we believe that we are saved because the Master Jesus amazingly and out of sheer generosity moved to save us just as he did those from beyond our nation? So what are we arguing about?”

The same continues to be true today in all the religious systems that seek to gain access to God and freedom from sin in some manner other than coming to Christ and seeking the rest that only He can give. When a person listens and follows the offer and comes to Christ, then rest is given. This is because the bondage of sin is broken, a cure is given and a person can begin to live in a manner that is pleasing to God. Access to God – which was never available before regardless of how many acts of righteousness or penance a person did – is now freely available through Jesus Christ. Christians are given rest for their souls and because of this, they are no longer weary and heavy-laden. Jesus exchanges the yoke of man-made religion for the truth of His Mercy and Grace.