Teen Tree of Life – The Necessity of Being Prepared – Part 1 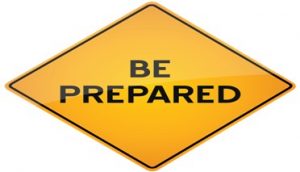 The Necessity of Being Prepared - Part 1

“God’s kingdom is like ten young virgins who took oil lamps and went out to greet the bridegroom. Five were silly and five were smart. The silly virgins took lamps, but no extra oil. The smart virgins took jars of oil to feed their lamps. The bridegroom didn’t show up when they expected him, and they all fell asleep. In the middle of the night someone yelled out, ‘He’s here! The bridegroom’s here! Go out and greet him!’ The ten virgins got up and got their lamps ready. The silly virgins said to the smart ones, ‘Our lamps are going out; lend us some of your oil.’ They answered, ‘There might not be enough to go around; go buy your own.’ They did, but while they were out buying oil, the bridegroom arrived. When everyone who was there to greet him had gone into the wedding feast, the door was locked. Much later, the other virgins, the silly ones, showed up and knocked on the door, saying, ‘Master, we’re here. Let us in.’ He answered, ‘Do I know you? I don’t think I know you.’ So stay alert. You have no idea when he might arrive. (MATT 25:1-13 The Message Bible)

In The Book of Ecclesiastes, Solomon presents the conclusion that “life under the sun” – which is life apart from God – is vanity and amounts to futile emptiness. Tragically, there is an increasing percentage of the population, around the world and in our own nation, that foolishly lives with a quest to find some sort of meaning to life apart from God. Their hope is to find a purpose in life in things such as materialism, hedonism (pursuit of pleasure), fame, power, position, or even in a false religion. Solomon, the wisest man who ever lived (apart from Jesus Christ), explored all of these areas of purpose through either personal experience or careful observation. In Ecclesiastes, he succinctly removes the facade to expose the ultimate reality that each of these pursuits amounts to chasing after the wind.

Materialism won’t matter ultimately because when you have accumulated wealth, you usually keep wanting more. Hedonism (pursuit of pleasure) does not satisfy because its pleasures don’t last, so there is a constant quest for the next experience. Fame fades so that within a generation or two, you’re not even remembered. Power and position are also transitory because there are always those seeking to replace you, and someone will eventually succeed, even if it is at your death. Even worse, those whose god is power, will be judged by the true God for how they used their position and authority in the treatment of others and in fulfilling God’s Commandments. That is a very sobering reminder to all the politicians out there. When you’re in authority, your ultimate accountability is to God, not to the people that elected you.

False religions are the worst on the list because very often those pursuing one will often not recognize their error until they stand before God. That is why The Lord Jesus Christ’s Words in MATT 7:21-23 (New International Reader’s Version) are so sobering: “Not everyone who says to me, ‘Lord, Lord,’ will enter the kingdom of heaven. Only those who do what my Father in heaven wants will enter. Many will say to me on that day, ‘Lord! Lord! Didn’t we prophesy in your name? Didn’t we drive out demons in your name? Didn’t we do many miracles in your name?’ Then I will tell them clearly, ‘I never knew you. Get away from me, you who do evil!’”

Those who figure out these things, as Solomon did, but still pursue “life under the sun” apart from God, become cynics or rebellious. Without true meaning and hope in their lives, they try to find ways to escape the pain we all endure. Some will do that in wild pursuits of what will at least fill the void for a moment or two. Others will turn to drugs or other means of “checking out” from reality, and others will even take their own lives through suicide, as a final means of escape. Solomon’s conclusion in ECC 12:13-14 (New International Reader’s Version) points the cynical and rebellious to the source of hope: Everything has now been heard. And here’s the final thing I want to say. Have respect for God and obey his commandments. This is what he expects of all human beings. God will judge everything people do. That includes everything they try to hide. He’ll judge everything, whether it’s good or evil. Ecclesiastes contrasts so well the difference between “life under the SUN” without God and life under the SON, The Lord Jesus Christ!

Now look at 1 PET 1:3 (New International Reader’s Version): Give praise to the God and Father of our Lord Jesus Christ. In his great mercy he has given us a new birth and a living hope. This hope is living because Jesus Christ rose from the dead. This verse perfectly describes what doesn’t exist in “life under the sun.” Finding redemption and forgiveness by faith in Jesus Christ gives the believer meaning in life for both the present and the future. Salvation from sin adds greatly to the purpose of life because it assures us of our eternal future. We can have confident assurance that Our Savior Jesus Christ, Who is currently in heaven is working on our behalf even as we speak! According to JOH 14:1-4 (New International Reader’s Version) we learn He is preparing a place especially for us where we will be with Him and His Father forever: “Do not let your hearts be troubled. You believe in God. Believe in me also. There are many rooms in my Father’s house. If this were not true, would I have told you that I am going there? Would I have told you that I would prepare a place for you there? If I go and do that, I will come back. And I will take you to be with me. Then you will also be where I am. You know the way to the place where I am going.” We can also be comforted and have hope in this life knowing that one day, He will be “coming with the clouds!” (REV 1:7 New International Reader’s Version)

MATTHEW 24 teaches us about the various signs that The Lord Jesus Christ states will indicate that His Return to set up His Kingdom on Earth is near. The Scripture passage describes the various signs that will be seen by the generation that is alive when He returns in a cloud at what is called The Rapture. The Rapture occurs before the Tribulation period while the Second Coming (Second Advent) occurs at the end of the Tribulation.

With respect to the time leading up to The Rapture, Our Lord states that: Many will come in my name. They will claim, ‘I am the Messiah!’ They will fool many people. You will hear about wars. You will also hear people talking about future wars. Don’t be alarmed. Those things must happen. But the end still isn’t here. Nation will fight against nation. Kingdom will fight against kingdom. People will go hungry. There will be earthquakes in many places. All these are the beginning of birth pains. (MATT 24:5-8 New International Reader’s Version)

This beginning period following The Rapture contains events of the first half of the seven-year tribulation period known as “the beginning of birth pangs.” Since The Tribulation begins with the arrival of the antichrist on the scene, it is not surprising that MATT 24:4 (New International Reader’s Version) begins with a warning to believers about his arrival: Jesus answered, “Keep watch! Be careful that no one fools you.” This is part of being prepared!!

Immediately after those days of tribulation, and prior to The Lord’s Return, there will be various signs in the heavens described in MATT 24:29 (New International Reader’s Version): “Right after the terrible suffering of those days, ‘The sun will be darkened. The moon will not shine. The stars will fall from the sky. The heavenly bodies will be shaken.’” (Isaiah 13:10; 34:4) These events are also described in Revelation, Ezekiel, Jeremiah, Zechariah, and in other prophecies. They could occur in the current generation, or The Lord may wait for a generation to come, but either way, there is a strong message and warning here for us too. It is only after all these things occur that Jesus Christ will return with power and great glory. The Scriptures teach that true believers will be removed from the earth prior to all these things at The Rapture. But we must prepare beforehand!!