Teen Tree of Life – The Necessity of being Prepared – Part 2 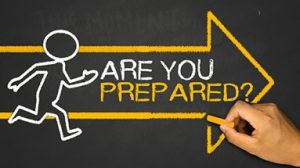 The Necessity of Being Prepared - Part 2

“God’s kingdom is like ten young virgins who took oil lamps and went out to greet the bridegroom. Five were silly and five were smart. The silly virgins took lamps, but no extra oil. The smart virgins took jars of oil to feed their lamps. The bridegroom didn’t show up when they expected him, and they all fell asleep. In the middle of the night someone yelled out, ‘He’s here! The bridegroom’s here! Go out and greet him!’ The ten virgins got up and got their lamps ready. The silly virgins said to the smart ones, ‘Our lamps are going out; lend us some of your oil.’ They answered, ‘There might not be enough to go around; go buy your own.’ They did, but while they were out buying oil, the bridegroom arrived. When everyone who was there to greet him had gone into the wedding feast, the door was locked. Much later, the other virgins, the silly ones, showed up and knocked on the door, saying, ‘Master, we’re here. Let us in.’ He answered, ‘Do I know you? I don’t think I know you.’ So stay alert. You have no idea when he might arrive. (MATT 25:1-13 The Message Bible)

As we continue to study the Necessity of Being Prepared, we are going to look at the suddenness of The Lord Jesus Christ’s Coming. In the rest of Matthew 24, He gives various parables and illustrations about His Coming and the need to be prepared for it. One is found in MATT 24:44 (New International Reader’s Version): So you also must be ready. The Son of Man will come at an hour when you don’t expect him. Though there will be many signs pointing out that His Coming is near, most people will pay no attention to the obvious. In fact, MAT 24:33 (New International Reader’s Version): states: In the same way, when you see all these things happening, you know that the end is near. It is right at the door. Imagine, His Coming will be “right at the door” and people will be distracted and not even notice. And so many will not be prepared!

It will be just like in the days of Noah when the people continued to live their normal lives, doing their normal activities, even though the ark that Noah was building stood as a constant reminder of The Truth that he was proclaiming about God’s Coming Judgment. Most people alive during the Tribulation will ignore the signs, even though they will be so dramatic and obvious. These people will continue in their normal activities of life: Remember how it was in the days of Noah. It will be the same when the Son of Man comes. In the days before the flood, people were eating and drinking. They were getting married. They were giving their daughters to be married. They did all those things right up to the day Noah entered the ark. They knew nothing about what would happen until the flood came and took them all away. That is how it will be when the Son of Man comes. (MATT 24:37-39 New International Reader’s Version) So never forget that Jesus Christ’s Coming is sudden!

Matthew 24 and the parallel passages show that Jesus Christ took great care to give ample warning concerning His Return. Everyone should be able to discern that the season of His return has come upon them in the same manner that they can tell summer is coming. Our Lord makes this point in MATT 24:32 (New International Reader’s Version): “Learn a lesson from the fig tree. As soon as its twigs get tender and its leaves come out, you know that summer is near.”

Jesus warns over and over again to be prepared for His return stating specifically in MATT 24:42-43 (New International Reader’s Version): “So keep watch. You do not know on what day your Lord will come. You must understand something. Suppose the owner of the house knew what time of night the robber was coming. Then he would have kept watch. He would not have let his house be broken into.”

Ignoring the signs given will not be an excuse. The wicked will be taken away to judgment and cast into the outer darkness where there will be weeping and gnashing of teeth. Our Lord and Savior shares this parable in MATT 24:45-51 (New International Reader’s Version): “Suppose a master puts one of his slaves in charge of the other slaves in his house. The slave’s job is to give them their food at the right time. The master wants a faithful and wise slave for this. It will be good for the slave if the master finds him doing his job when the master returns. What I’m about to tell you is true. The master will put that slave in charge of everything he owns. But suppose that slave is evil. Suppose he says to himself, ‘My master is staying away a long time.’ Suppose he begins to beat the other slaves. And suppose he eats and drinks with those who drink too much. The master of that slave will come back on a day the slave doesn’t expect him. He will return at an hour the slave does not know. Then the master will cut him to pieces. He will send him to the place where pretenders go. There people will weep and grind their teeth.”

Judgment will come suddenly and catch the wicked off guard when Jesus Christ returns. For whatever their reason, they either ignored the signs or think they will still have time to clean themselves up and be ready for Him. Many are living that way today. They think they can clean up their act and get right with God anytime they want, and they believe they have plenty of time to catch up. They put off the claims of Christ saying they will deal with them later after they have “sowed their wild oats” and enjoyed the pleasures of this world for a while. But as Paul states in GAL 6:7-8 (New International Reader’s Version): Don’t be fooled. You can’t outsmart God. A man gathers a crop from what he plants. Some people plant to please their desires controlled by sin. From these desires they will harvest death. Others plant to please the Holy Spirit. From the Spirit they will harvest eternal life. Failure to heed God’s Warnings results in risking destruction. No man knows the day that God will call him into account. Physical death is only one breath away for all of us. Matthew 24 gives general warnings to all, but The Lord Jesus Christ changes the target of His Warnings in the next chapter.

Jesus gives two more parables before continuing His description of the judgment that will occur at His Coming. Each parable contains both a blessing and curse. Both parables are encouragements to those who are faithful and ready, and warnings to those who are not. This is not a new theme for The Lord Jesus Christ. He has often given strong warnings to those that claim to be followers of God, but in reality are not. False professions of faith are serious, and even more so because of the self-deception that is so often a part of them.

The first parable is set at the occasion of a Jewish wedding. Let’s look at the normal events of such a wedding before we continue so that the parable will be more easily understood. A Jewish marriage of that time consisted of three parts. The first part was what we might call the marriage arrangement or the engagement. This was done between the fathers of the man and the woman who were to be married. Arranged marriages sound very strange and maybe even like a terrible thing to most Americans, yet actually they had many positive aspects. While there were some fathers that made arrangements for financial or social gain, most were very considerate of the desires of their son or daughter too. In most cases, a son would ask his father to arrange to get a certain girl for him as a wife. That girl’s father would check out the young man to make sure he had the character qualities to be a good husband for his daughter, and he would also find out how his daughter felt. The two fathers would then make an agreement as to what the dowry, obligations and arrangements would be.

The second event in the marriage process was the betrothal. This was a legal union brought about by the exchange of marriage vows between the bride and groom in front of family members and included the dowry being given for the bride. The dowry was usually money, property, jewels, or other valuable items that were to be a financial protection to the woman should her husband die. The couple that was betrothed was considered legally married, though they did not live together. The groom would then spend several months to a year preparing for his wife by establishing himself in his trade or farming and preparing a place for them in which to live. This could be quite an undertaking when you consider that most men married when they were 16 or 17 with 20 being the limit. For the betrothal to be broken, there had to be a legal divorce. If the groom died during the betrothal period, the bride was considered a widow. Unfaithfulness was adultery even though the marriage itself had not been consummated.

The third part of a marriage was the wedding feast. This is what Jesus Christ is describing in this parable. The entire community could be involved in this celebration which could last even up to a week. The festivities began with a bridal procession. The groom and his friends would come to the bride’s house where she and her bridesmaids were waiting. The whole party would then parade through the streets proclaiming that the wedding feast was about to begin. They would eventually arrive at the groom’s home or another place prepared for them. These wedding processions were often at night with the wedding attendants carrying lamps or torches to light the way and to attract attention. At the end of the feast, the couple would be left alone for the first time to consummate the marriage and they would then live together from that point on.