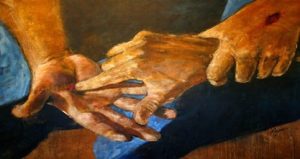 Those who are devoutly religious might point out the date of birth of the founder of their religion or some significant event in its founding. Even in Christianity, many people will point to The Birth of Jesus Christ as the most important event in history. But none of these events, including the Our Lord’s Birth, is the most significant event in all of human history. It also isn’t the death of any particular person or even a group of people. Every day marks the death of thousands of people on this earth. Some die in obscurity and almost no one even notices, while others have long obituaries written about them and they are mourned by many. But again, time eventually removes the memory of them.

Now, the most important event in history is actually related to death. As we all know, death is an enemy that strikes universal fear into the hearts of most people and causes them to do all sorts of things to try to avoid it. The fundamental question of humanity is: has anyone conquered death and can they enable me to conquer it to? That question can be answered with a resounding YES! This is because the most significant event in all of human history is The Resurrection of Jesus Christ from the dead. Yes, without question, that is the most important event in history!

The Sabbath day was now over. It was dawn on the first day of the week. Mary Magdalene and the other Mary went to look at the tomb. There was a powerful earthquake. An angel of the Lord came down from heaven. The angel went to the tomb. He rolled back the stone and sat on it. His body shone like lightning. His clothes were as white as snow. The guards were so afraid of him that they shook and became like dead men. The angel said to the women, “Don’t be afraid. I know that you are looking for Jesus, who was crucified. He is not here! He has risen, just as he said he would! Come and see the place where he was lying. Go quickly! Tell his disciples, ‘He has risen from the dead. He is going ahead of you into Galilee. There you will see him.’ Now I have told you.” So the women hurried away from the tomb. They were afraid, but they were filled with joy. They ran to tell the disciples. Suddenly Jesus met them. “Greetings!” he said. They came to him, took hold of his feet and worshiped him. Then Jesus said to them, “Don’t be afraid. Go and tell my brothers to go to Galilee. There they will see me.” (MATT 28:1-10 (New International Reader’s Version)

This accounting in Matthew 28 is very familiar to most of us, but it’s still thrilling to read. What an exciting morning! What an experience! Seeing the angel was so frightening to the guards that they shook and froze in place! Can you imagine?? Mary was also afraid, but The Angel of The Lord calmed her and then announced the most wonderful news in history. He knew she was looking for Jesus Christ Who had been crucified, so the Angel said, “He is not here! He has risen, just as he said he would! Come and see the place where he was lying.” The Lord Jesus Christ had conquered death as He said He would. His promises are true. Man now has hope of Eternal Life.

Give praise to the God and Father of our Lord Jesus Christ. In his great mercy he has given us a new birth and a living hope. This hope is living because Jesus Christ rose from the dead. He has given us new birth so that we might share in what belongs to him. This is a gift that can never be destroyed. It can never spoil or even fade away. It is kept in heaven for you. Through faith you are kept safe by God’s power. Your salvation is going to be completed. It is ready to be shown to you in the last days. (1 PE 1:3-5 New International Reader’s Version) This Resurrection Hope is at the heart of the Gospel Message. The conquering of the consequence of sin – death – demonstrated that Jesus Christ’s Atonement by His Own Blood for our sin was adequate to redeem us and restore us to God. People could be forgiven of their sins through faith in Jesus Christ and given the assurance of Eternal Life. The Good News of the Gospel is that your sin can be forgiven and you can escape the eternal consequences of death. Like Jesus Christ, the grave will not hold you, and you will be resurrected to new life. Sin and death have been conquered. And because of this, Christians need not fear them. Do you see now why The Resurrection of Jesus Christ from the dead is the most important event in history??

Many passages teach us about the Hope of Resurrection. Paul understood that this hope was a central aspect of the Gospel, and so he used it in his defense before the Sadducees and the Pharisees: “Friends, I am a stalwart Pharisee from a long line of Pharisees. It’s because of my Pharisee convictions—the hope and resurrection of the dead—that I’ve been hauled into this court.” The moment he said this, the council split right down the middle, Pharisees and Sadducees going at each other in heated argument. Sadducees have nothing to do with a resurrection or angels or even a spirit. If they can’t see it, they don’t believe it. Pharisees believe it all. And so a huge and noisy quarrel broke out. (ACTS 23:6-9 The Message Bible)

Peter also writes about the Hope of Resurrection in 1 PE 1:3-5 (New International Reader’s Version): Give praise to the God and Father of our Lord Jesus Christ. In his great mercy he has given us a new birth and a living hope. This hope is living because Jesus Christ rose from the dead. He has given us new birth so that we might share in what belongs to him. This is a gift that can never be destroyed. It can never spoil or even fade away. It is kept in heaven for you. Through faith you are kept safe by God’s power. Your salvation is going to be completed. It is ready to be shown to you in the last days. What exactly is this “living hope” that those who are born again receive through The Resurrection of Jesus Christ? As Peter explains here, it is the promise of a future inheritance which will be imperishable and undefiled. It cannot end and it cannot be corrupted.

Hope is absolute confidence, total assurance, as well as comfort. It is our comfort in relation to future things. It is confidence about future things because of The Promises of God. The source of hope is perception and metabolization of God’s Word. Hope is not ignorance, uncertainty, or oscillation but confidence in God and Who He Is.

In 1 COR 15:35, Paul raises the question that some might ask: “How are the dead raised? What kind of body will they have?” In answer to the question posed, Paul uses the analogy of planting a seed to explain how the dead are raised: What you plant doesn’t come to life unless it dies. When you plant something, it isn’t a completely grown plant that you put in the ground. You only plant a seed. Maybe it’s wheat or something else. But God gives the seed a body just as he has planned. And to each kind of seed he gives its own body. Not all earthly creatures are the same. People have one kind of body. Animals have another. Birds have another kind. Fish have still another. There are also heavenly bodies as well as earthly bodies. Heavenly bodies have one kind of glory. Earthly bodies have another. The sun has one kind of glory. The moon has another kind. The stars have still another. And one star’s glory is different from that of another star. It will be like that with bodies that are raised from the dead. The body that is planted does not last forever. The body that is raised from the dead lasts forever. It is planted without honor. But it is raised in glory. It is planted in weakness. But it is raised in power. It is planted as an earthly body. But it is raised as a spiritual body. Just as there is an earthly body, there is also a spiritual body. (1 COR 15:36-44 New International Reader’s Version)

Those that are alive at the coming of Jesus Christ at The Rapture will not have to experience physical death. They will be changed from having a perishable body to an imperishable one, from mortal to immortal in the twinkling of an eye. How fast is the twinkling of an eye? It is the amount of time it takes for light to travel through the cornea of the eye to the lens and be reflected back through it. In that same period of time, those that had previously died will have their physical bodies raised and changed into imperishable bodies.

We only really know a few things about our future spiritual bodies. They will be imperishable. They will be immortal. They will be like the body that The Lord Jesus Christ displayed after His Resurrection. Our Savior’s Resurrection Body had some physical aspect because He invited the apostle Thomas to touch His hands and side. Look at JOH 20:24-27 (New International Reader’s Version): Thomas was one of the 12 disciples. He was also called Didymus. He was not with the other disciples when Jesus came. So they told him, “We have seen the Lord!” But he said to them, “First I must see the nail marks in his hands. I must put my finger where the nails were. I must put my hand into his side. Only then will I believe.” A week later, Jesus’ disciples were in the house again. Thomas was with them. Even though the doors were locked, Jesus came in and stood among them. He said, “May peace be with you!” Then he said to Thomas, “Put your finger here. See my hands. Reach out your hand and put it into my side. Stop doubting and believe.”