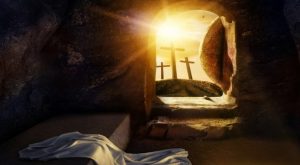 We ended last week’s Teen Tree looking at the few things we know about our future spiritual bodies – our resurrection bodies. We learned that they will be imperishable, immortal, and like the body that The Lord Jesus Christ displayed after His Resurrection. We noted that Our Savior’s Resurrection Body had some physical aspects because He invited the apostle Thomas to touch His hands and side. The Lord Jesus Christ also physically walked with the disciples on the road to Emmaus: That same day two of Jesus’ followers were going to a village called Emmaus. It was about seven miles from Jerusalem. They were talking with each other about everything that had happened. As they talked about those things, Jesus himself came up and walked along with them. (LUKE 24:13-15 New International Reader’s Version)

LUKE 24:36-43 (The Message Bible) tells us that Our Savior actually ate in His Resurrected Body: While they were saying all this, Jesus appeared to them and said, “Peace be with you.” They thought they were seeing a ghost and were scared half to death. He continued with them, “Don’t be upset, and don’t let all these doubting questions take over. Look at my hands; look at my feet—it’s really me. Touch me. Look me over from head to toe. A ghost doesn’t have muscle and bone like this.” As he said this, he showed them his hands and feet. They still couldn’t believe what they were seeing. It was too much; it seemed too good to be true. He asked, “Do you have any food here?” They gave him a piece of leftover fish they had cooked. He took it and ate it right before their eyes.

The Lord Jesus Christ – in His Resurrected Body – also lit a fire, then prepared and served breakfast for some of the apostles on another occasion in JOH 21:9-14 (The Message Bible): When they got out of the boat, they saw a fire laid, with fish and bread cooking on it. Jesus said, “Bring some of the fish you’ve just caught.” Simon Peter joined them and pulled the net to shore—153 big fish! And even with all those fish, the net didn’t rip. Jesus said, “Breakfast is ready.” Not one of the disciples dared ask, “Who are you?” They knew it was the Master. Jesus then took the bread and gave it to them. He did the same with the fish.

So, in His Resurrection Body, Our Lord Jesus Christ was able to do the normal tasks any man could perform, but of course, He also had abilities far beyond a physical body. He could suddenly appear in a locked room and suddenly disappear while others were watching: He joined them at the table. Then he took bread and gave thanks. He broke it and began to give it to them. Their eyes were opened, and they recognized him. But then he disappeared from their sight. (LUK 24:30-31 New International Reader’s Version) He also rose up into the air and into the clouds at His Ascension: After Jesus said this, he was taken up to heaven. The apostles watched until a cloud hid him from their sight. While he was going up, they kept on looking at the sky. Suddenly two men dressed in white clothing stood beside them. “Men of Galilee,” they said, “why do you stand here looking at the sky? Jesus has been taken away from you into heaven. But he will come back in the same way you saw him go.” (ACTS 1:9-11 New International Reader’s Version) This had to be quite an exciting experience for those who witnessed this, don’t you think?

Paul concludes his explanation about the resurrection body in 1 COR 15:50-58 (New International Reader’s Version): Brothers and sisters, here is what I’m telling you. Bodies made of flesh and blood can’t share in the kingdom of God. And what dies can’t share in what never dies. Listen! I am telling you a mystery. We will not all die. But we will all be changed. That will happen in a flash, as quickly as you can wink an eye. It will happen at the blast of the last trumpet. Then the dead will be raised to live forever. And we will be changed. Our natural bodies don’t last forever. They must be dressed with what does last forever. What dies must be dressed with what does not die. In fact, that is going to happen. What does not last will be dressed with what lasts forever. What dies will be dressed with what does not die. Then what is written will come true. It says, “Death has been swallowed up. It has lost the battle.” (Isaiah 25:8) “Death, where is the victory you thought you had? Death, where is your sting?” (Hosea 13:14) The sting of death is sin. And the power of sin is the law. But let us give thanks to God! He gives us the victory because of what our Lord Jesus Christ has done. My dear brothers and sisters, remain strong in the faith. Don’t let anything move you. Always give yourselves completely to the work of the Lord. Because you belong to the Lord, you know that your work is not worthless.

Now, let’s look at the importance of The Resurrection. It would seem that how important it is would be understood, but in Paul’s day, questioning it would have been common. The New Testament had not yet been written down so when someone questioned the truth of The Gospel, they couldn’t turn to it to read a firsthand account of events. Many of the believers were relying on oral testimonies passed down from eye witnesses. Were the Gospel accounts being accurately recounted? Had they heard and understood correctly? Was there anyone misleading them along the way?

What Paul answered in these verses settled any questions concerning The Resurrection, yet there are still those in our lifetime that claim to be Christians but do not think the physical Resurrection of Jesus Christ is important at all. In fact, some forcefully deny it happened. These are the same people that deny the Scriptures are true. They are clearly not followers of Jesus Christ.

The claim of Jesus Christ’s Bodily Resurrection is central to the Gospel message. Without His Bodily Resurrection, His Claims to Divinity would be empty, and the Gospel’s claim to be The Power of God for salvation would be false. Although many have questioned the legitimacy of the claim of Resurrection, six facts support the credibility of the historical claim. First, death by crucifixion was not something that the followers of The Lord Jesus Christ were likely to invent. Second, His burial account fits with all historical evidence that we have. Third, the claim of the empty tomb was easily verifiable, but there are no contradictory accounts. Fourth, the apostles claim to have met the resurrected Jesus Christ face-to-face. Fifth, these apostles were willing to suffer and die for these claims. Sixth, those who were very unlikely to be converted to this belief were, nonetheless, converted by means of personal experiences of The Resurrected Christ.