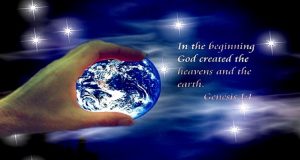 We are going to start today’s message with a reading directly from God’s Word, the Bible, in the first book, Genesis 1:

In the beginning, God created the heavens and the earth. 2 The earth didn’t have any shape. And it was empty. There was darkness over the surface of the waves. At that time, the Spirit of God was hovering over the waters.

9 God said, “Let the water under the sky be gathered into one place. Let dry ground appear.” And that’s exactly what happened. 10 God called the dry ground “land.” He called all the water that was gathered together “seas.” And God saw that it was good.

20 God said, “Let the seas be filled with living things. Let birds fly above the earth across the huge space of the sky.” 21 So God created the great sea creatures. He created every kind of living thing that fills the seas and moves about in them. He created every kind of bird that flies. And God saw that it was good. 22 God blessed them. He said, “Have little ones so that there will be many of you. Fill the water in the seas. Let there be more and more birds on the earth.” 23 There was evening, and there was morning. It was day five.

28 God blessed them. He said to them, “Have children so that there will be many of you. Fill the earth and bring it under your control. Rule over the fish in the seas and the birds in the sky. Rule over every living creature that moves along the ground.”

29 Then God said, “I am giving you every plant on the face of the whole earth that produces its own seeds. I am giving you every tree that has fruit with seeds in it. All of them will be given to you for food. 30 I am giving every green plant as food for all the land animals and for all the birds in the sky. I am also giving the plants to all the creatures that move along the ground. I am giving them to every living thing that breathes.” And that’s exactly what happened. (GEN 1: 1-30 New International Reader’s Version)

Do you know what evolution is? It’s defined as the process of growth and development or the theory that organisms have grown and developed from past organisms. An example of evolution is how cell phones have changed over time.

Many non-Christians deny God’s work in Creation and believe that man evolved from organisms that already existed. Also, many Christians reject God’s Work in Creation. They may agree that God got it started, but then, to one degree or another, they say that evolution took it from there. However, evolution is a bankrupt philosophy that is contrary to actual science and has no part in Creation in any way, shape, or form.

Evolution contradicts both. If the philosophical speculation of evolution is true, then GENESIS 1 is not true. In fact, it would even be a bad story since the sequence of events, and not just the exaggeration of time, would be wrong. Notice that He makes the plants on Day 3 before the sun and moon are made on Day 4. He makes birds on Day 5 before He makes land creatures on Day 5. In simple terms, chickens come before dinosaurs.

The only reason people advocate evolution as part of the Creation is presupposing that evolutionary scientists are more honest and truthful than God’s Revelation. Evolution is bloated with “just so” stories, speculation, and humanistic philosophy. It doesn’t even qualify to be a theory since it is neither testable nor observable nor repeatable, and it completely lacks as history since the only eye witness was God, and He contradicts it!! True science seeks to understand the real world and so welcomes criticism so that its hypotheses and theories can be confirmed, modified, or rejected. Evolution is not science because it does not do this. It is a philosophical hypothesis and its speculation.

So, either God is the Creator and created all things as He claims, or He is a liar. If He is a liar, He cannot be trusted and you are on your own to make sense of your existence and the purpose of life. That has a lot of ramifications. Think about this for a moment: those who hold to atheistic evolution have no meaning in life since it is simply a random set of chemicals reacting over a short period of time, and the only purpose in life is to pass down your genetic information to the next generation and perhaps seek to help it survive. Those who hold to any form of theistic evolution have a god who is something other than the God who reveals Himself in the Bible. Those who hold to any of the false religions have to deal with all its falsehoods and contradictions, and the one common denominator in all false religions is that the favor of the god or gods must be earned. As you know, that is not true in Christianity.

Everything in Creation points back to the Creator. God is Our Creator, and that has many ramifications including that He is Worthy of our honor, thanks, and worship, and that we are responsible to Him to fulfill the purposes for which He created us. That should cause each of us to have the proper respect for Him. That is a good starting point because of what PROV 9:10 teaches us: If you want to become wise, you must begin by respecting the Lord. To know the Holy One is to gain understanding.