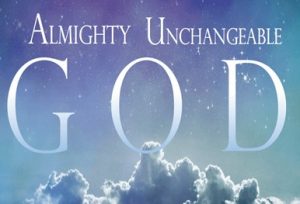 Last week, we began to look at three other attributes of God which give us even more reasons to trust Him. God is Self-Existent, Self-Sufficient, and Immutable. Or stated another way, God’s Origin is Himself, He does not need or depend on anything outside Himself, and He is Unchanging in His Nature, Character, and Attributes.

We learned that God’s Self-Existence is not something we can truly comprehend because it is completely out of any frame of reference by which we could try to understand it. Everything we know has some point of origin. There was some cause for it. Whatever it is, it exists or happened because something prior to it caused it to exist or happen. But there is nothing that “caused” God. God is the uncaused cause. His very existence arises from Himself.

The next attribute – Self-Sufficient – comes directly from the fact that God is Self-Existent. A being which has His Origin within Himself, and from which everything else that exists has its origin, has no need for something outside Himself. That makes Him completely Self-Sufficient. Some writers often refer to God’s Attributes as His Divine Perfections. That’s a good description that certainly fits and must be applied to this attribute. Why? Because for God to have a need – some necessity outside Himself – would mean that there is some incompleteness or imperfection in His Divine Being. But God is Complete and Perfect. His Self-Existence means that He is What He is in Himself. He has no need outside Himself. Nothing outside of Himself is necessary to Him.

The word “need” is a word that is only applied to what God has created. All things need God and are in need of what God has created. Look at COL 1:17 (New International Reader’s Version) which puts it perfectly: Before anything was created, he was already there. He holds everything together. Without God’s Continual Intervention, everything would fall apart. Even to this day, nuclear physicists cannot explain what holds an atom together. They have discovered and theorized all sorts of sub-atomic particles, but what force keeps it all together is still not understood. The only answer is God!

All that God has created has needs. Every created thing is dependent on other aspects of creation. The sun is dependent upon the materials from which it was formed. Gravity is dependent upon the physics of whatever causes it to exist that is bound up in material bodies with mass. Without mass, there is no gravity. Clouds can’t form without water, air, heat, and gravity. Man cannot survive without air, food, water, and shelter. And we are in desperate need of Salvation from sin – which has been provided by God’s Grace through faith in The Person and Work of The Lord Jesus Christ.

Now, since God is self-sufficient, what are some possible reasons He created the universe? We easily find the answers in the Scriptures. One reason is found in PHIL 2:13 (New International Reader’s Version): God is working in you. He wants your plans and your acts to fulfill his good purpose.

Another reason He created the universe is to the kind intention of His Own Will. EPH 1:8-11 (New International Reader’s Version): He poured his grace on us. By giving us great wisdom and understanding, he showed us the mystery of his plan. It was in keeping with what he wanted to do. It was what he had planned through Christ. It will all come about when history has been completed. God will then bring together all things in heaven and on earth under Christ. We were also chosen to belong to him. God decided to choose us long ago in keeping with his plan. He works out everything to fit his plan and purpose. 2 TIM 1:9 (New International Reader’s Version) also covers this idea: God has saved us. He has chosen us to live a holy life. It wasn’t because of anything we have done. It was because of his own purpose and grace. Through Christ Jesus, God gave us this grace even before time began.

A third reason God created the universe is for His Own Glory. Look at PSA 19:1 (New International Reader’s Version): The heavens tell about the glory of God. The skies show that his hands created them. And REV 4:11 (New International Reader’s Version): “You are worthy, our Lord and God! You are worthy to receive glory and honor and power. You are worthy because you created all things. They were created and they exist. This is the way you planned it.”

Because God is self-sufficient, He does what He does for His Own Purposes – as He desires. All that exists has value only as value is imparted to it by God by His Own Determination. The fundamental value of humanity is solely due to being made in God’s Image and in fulfilling His Purposes. God does not need our help. He is not greater due to our existence nor would He be less if we did not exist. But how is this a basis for trusting Him? If God needed us, then our existence and value would be dependent upon what we can give to Him, and since every human is limited in various ways, no one would have hope of succeeding. Not only would our best efforts be insufficient to meet His perfect standard, but the reality is that failure is normal for us and sin compounds that.

Your existence and God’s Acceptance of you is dependent upon His Own Will which is Stable and Trustworthy because He is Consistent with Himself. We can take comfort and be at peace in His Promises extended to us as unworthy creatures because He demonstrated His love toward us when Jesus Christ died for us while we were still sinners in rebellion against Him. We can trust God because our relationship with Him is dependent upon Him fulfilling His Own Will and not our feeble and failing efforts. He saves people from sin because He is Merciful and Gracious and not on the basis of any good works which we have done. This also allows trust to build, because God will meet the needs of His people as we step forward to put His Kingdom and Righteousness first in our lives. This is taught in MATT 6:33 (New International Reader’s Version): But put God’s kingdom first. Do what he wants you to do. Then all those things will also be given to you.

As Christians, we have to depend on God for everything because all that we are and do is dependent upon Him being at work in and through us. That is a safe place to be because God is Trustworthy in all things. Even those human beings with exemplary character cannot be fully trusted because as humans we cannot control all the factors necessary to keep every promise we make. We may be strong or wise enough to do it, but too many factors can interfere with the outcome of a promise – our car breaks down, we get sick, the materials don’t arrive in time. But God is Self-Sufficient. None of that can ever happen to Him.

The last attribute we’re going to look at is God’s immutability. Immutability is just a big word that means unchanging. Immutability arises out of God being Self-Existent, Self-Sufficient, and Eternal. Several Scripture passages point out that immutability is a characteristic of God.

One is NUM 23:19 (New International Reader’s Version) which contrasts the nature of man with that of God: God isn’t a mere human. He can’t lie. He isn’t a human being. He doesn’t change his mind. He speaks, and then he acts. He makes a promise, and then he keeps it. God is not like man. He does not lie. He does not change His Mind. He does what He says He will do. Those are qualities of immutability. 1 SAM 15:29 (New International Reader’s Version) shares the same message: “The God who is the Glory of Israel does not lie. He doesn’t change his mind. That’s because he isn’t a mere human being. If he were, he might change his mind.”

It is a blessing that man is the opposite of God – mutable, changing – because within that lies the hope of redemption and sanctification. In other words, because we are beings who can change, we can choose to believe in The Lord Jesus Christ and be saved! However, that a man could be changed for the better would be uncertain if God was changing because both He and His Promises could not be trusted.

God’s Immutability is a great comfort for the believer because it enables us to trust that He will remain true in His Nature, Character, and Attributes and to His Precious and Magnificent Promises which are part of all that He has granted to believers pertaining to life and godliness.  Look at 2 PE 1:4 (New International Reader’s Version): He has also given us his very great and valuable promises. He did it so you could share in his nature. You can share in it because you’ve escaped from the evil in the world. This evil is caused by sinful desires. These promises enable us to become partakers of the Divine Nature and escape the corruption that is in the world which as Peter tells us is “caused by sinful desires.” This is because Salvation comes from trust in the Promises related to the Person and Work of Jesus Christ in bringing about Redemption and the Forgiveness of sins.

In LUK 19:10 (New International Reader’s Version) The Lord and Savior Jesus Christ promises us that: “The Son of Man came to look for the lost and save them.” His invitation in MATT 11:28–30 (New International Reader’s Version)  contains more life-changing promises: “Come to me, all you who are tired and are carrying heavy loads. I will give you rest. Become my servants and learn from me. I am gentle and free of pride. You will find rest for your souls. Serving me is easy, and my load is light.”

We find another incredible promise in JOH 5:24 (New International Reader’s Version): “What I’m about to tell you is true. Anyone who hears my word and believes him who sent me has eternal life. They will not be judged. They have crossed over from death to life.”

His pledge in JOH 14:1–3 (New International Reader’s Version) is one that brought His Disciples great comfort and peace, as it should for all Christians: “Do not let your hearts be troubled. You believe in God. Believe in me also. 2 There are many rooms in my Father’s house. If this were not true, would I have told you that I am going there? Would I have told you that I would prepare a place for you there? If I go and do that, I will come back. And I will take you to be with me. Then you will also be where I am.”

While God’s immutability is a comfort to Biblical Christians, it should be a terror to those who aren’t. God also keeps His Promises of Judgment. Unbelievers deny God in various ways ranging from the blatant rejection of God by atheists to the subtle replacement of Him with a near substitute god and different gospel in the various cults. Regardless of the particulars of the denial, unbelievers do not think that the Biblical God poses a danger to them. However, the day will come when reality will be fully exposed and Our True God judges them according to His Unchangeable Word.