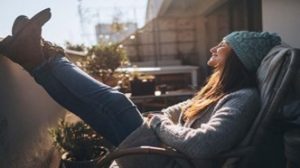 How can you be at peace in any situation? The world offers a lot of diverse answers to that question. Some of the solutions promoted are generally good and are helpful in helping to maintain a healthy life – such as a proper diet and exercise. Being healthy can help reduce stress, but it doesn’t give you peace in every situation. Things such as recreation, relaxing entertainment, a day off, or a vacation can give you a break both mentally and emotionally and give some temporary relief. Even Our Lord and Savior Jesus Christ had the disciples go with Him to a secluded place to take a rest: But many people were coming and going. So they did not even have a chance to eat. Then Jesus said to his apostles, “Come with me by yourselves to a quiet place. You need to get some rest.” (MAR 6:31 New International Reader’s Version)

So, even the Bible promotes taking a moment to get away and take a break. But peace gained from these moments is only temporary because you eventually have to get back to reality. Now, there are some people who seek alcohol and drugs, whether prescribed or illicit, to try to escape from their troubles. But again, the escape only gives temporary relief at best, and often makes it worse when reality has to be faced again.  So, the question remains, how can you be at peace in any situation?

The apostle Paul makes a very insightful comment related to this in PHIL 4:11-13 (Christian Standard Bible): … I have learned to be content in whatever circumstances I find myself. I know how to make do with little, and I know how to make do with a lot. In any and all circumstances I have learned the secret of being content—whether well fed or hungry, whether in abundance or in need. I am able to do all things through him who strengthens me. Paul had been a Christian long enough to know that by what God has promised – and through his own experiences – that God had always met his needs. He also knew that The Holy Spirit enabled him to live for the Glory of Christ in every situation. Paul knew that if God expected Paul to do it, He would also enable him to do it. That’s what Paul meant when he wrote “whatever circumstances.” Therefore Paul was content, sufficiently supplied, and not just at peace – but also without disquieting or oppressive thoughts or emotions. In fact, he was joyful even though he was in prison as he wrote this letter.

Look at what Paul wrote only a few sentences prior: Don’t worry about anything, but in everything, through prayer and petition with thanksgiving, present your requests to God. And the peace of God, which surpasses all understanding, will guard your hearts and minds in Christ Jesus. (PHIL 4:6-7 Christian Standard Bible) Paul knew from experience and practice that he could cast on The Lord any anxiety that came up by praying, and thanksgiving, and making his requests known to The Lord. And that doing this would result in God’s Peace which surpasses all comprehension. That’s very important to remember throughout your life.

What underlies all of this is what the prophet Isaiah succinctly stated in ISA 26:3-4 (New International Reader’s Version): “Lord, you will give perfect peace to those who commit themselves to be faithful to you. That’s because they trust in you. Trust in the Lord forever. The Lord himself is the Rock. The Lord will keep us safe forever.” But how then do you learn to trust God? It begins with acknowledging who He is as your Creator. Knowing Who He is gives you the meaning and purpose of your life. You don’t have to know all the reasons you experience the things you do. As it was for Job, it’s enough to know that God is Our Creator, and He cares for what He created. The better you know God and the longer you walk with Him, the better you will be able to trust Him. And the only way to do this is to study His Word!

Now let’s look at three other attributes of God which are more reasons to trust Him. God is Self-Existent, Self-Sufficient and Immutable. Or stated another way, God’s Origin is Himself, He does not need or depend on anything outside Himself, and He is Unchanging in His Nature, Character, and Attributes.

God’s Self-Existence is not something which we can comprehend because it is completely out of any frame of reference by which we could try to understand it. Everything we know has some point of origin. There was some cause for it. Whatever it is, it exists or happened because something prior to it caused it to exist or happen. But there is nothing that “caused” God. In the infinite regression of causes, God is the uncaused cause. His very existence arises from out of Himself. Now if that doesn’t make a lot of sense to you, that’s okay, because that’s the point. God is so different from us that we cannot comprehend Him except to the degree that He has revealed Himself to us.

The starting point of what understanding we can have of God’s Self-Existence begins with His Revelation of His Personal Name to Moses in EXODUS 3. Moses wanted to know what to tell the sons of Israel about who was sending him. What name was he supposed to use for The God of their fathers: God said to Moses, “I am who I am. Here is what you must say to the Israelites. Tell them, ‘I am has sent me to you.’” God also said to Moses, “Say to the Israelites, ‘The Lord is the God of your fathers. He has sent me to you. He is the God of Abraham. He is the God of Isaac. And he is the God of Jacob.’ My name will always be The Lord. Call me this name for all time to come. (EX 3:14-15 New International Reader's Version) God first declares His essential nature as “I Am who I Am.” This word is the verb of being – I am, I will be. The name Moses is told to use for the God of Abraham, Isaac and Jacob is derived from that verb. The name is composed of the four Hebrew letters hwhy (yod-heh-vav-heh). For various reasons, it has been pronounced in different ways over the centuries, including Jehovah, but it probably should be pronounced something like Yahweh. This is God’s Name of forever and His Memorial Name for all generations. It is His Covenant Name with Israel.

After the Babylonian captivity, by convention out of reverence for God’s Name and fear of using it in vain manner and breaking the Third of the Ten Commandments, the Jews would say Adonai instead of Yahweh whenever they read this name. That practice carried over into most English bible translations.

So, God’s Covenant Name, Yahweh, is derived from the verb, “to be” and directly points to Him being The Self-Existent One. To quote from the systematic theology, Biblical Doctrine, “the name implies that He had no beginning, will have no ending, and is ever present. The name also implies that His being is derived from His own self-determination to be and to be what He is, so He is eternally who and what He is.”

But how is this related to being able to trust God? First, it points out again that God is something other than us. We cannot attribute to Him either the frailties we have as creatures or the failing characteristics we have as sinful human beings. We cannot fully comprehend The Being that is so far beyond and different than us, so we must rely upon what He has revealed to us about Himself. As we learned last week, He is our Creator. We are simply creatures that He has created for His Own Purposes.

Second, this is the foundation for God’s other incommunicable attributes including His Eternality, Infinitude, Omniscience, Omnipotence and Sovereignty for He is the cause of all things. This is taught in JOH 1:3 (New International Reader's Version): All things were made through him. Nothing that has been made was made without him.

COL 1:16–17 (New International Reader's Version) states: All things were created in him. He created everything in heaven and on earth. He created everything that can be seen and everything that can’t be seen. He created kings, powers, rulers and authorities. All things have been created by him and for him. Before anything was created, he was already there. He holds everything together. These verses really say it all! Since His existence arises within Himself God is more than capable of fulfilling every aspect of His Will since all things originate in Him and that very same Will. That also means that there is nothing that is superior to Him and because of this, nothing can stop Him from fulfilling His Will. God can and will keep His promises.

Third, Jesus uses this very same designation for Himself in JOH 8:58 (New American Standard Bible): Jesus said to them, “Truly, truly I say to you, before Abraham was born, I am.” Our Lord and Savior equates Himself with God by declaring He also is the “I Am” – the Self-Existent One. That means Jesus Christ can also be trusted because He is in fact God. The miracle of The Incarnation in which The Second Person of The Divine Godhead took on human flesh through the virgin birth does not in any way diminish the fact that He is also God. That was Jesus’ point with this response. The Lord Jesus Christ is greater than Abraham because He existed before Abraham though His physical body was only a little over three decades old. How was that possible? Because Jesus is also the “I Am.” He is and bears the name of The Self-Existent God. We can trust what He has done in bringing about the plan of redemption to mankind through His Own Sacrificial Death. Jesus Christ’s Physical Human Body could be put to death, but as the “I Am,” He could and did raise it back to life proving His Claims about Himself and that He can and will keep His Promises.