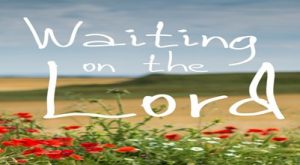 Wait for the Lord. Be strong and don’t lose hope. Wait for the Lord. (:14 New International Reader's Version) Learning how to wait on The Lord Jesus Christ for His Direction in life is one of the more difficult lessons for most Christians. Wouldn’t it be GREAT for Our Savior to give each of us a detailed list in sequential order of what to do each day? That would remove the wondering of what specific thing should be done next, and it would give us the sense of satisfaction that comes with checking off each item as it’s accomplished.

Goal-oriented people find it frustrating to have only minimal direction without specific tasks to do. They find great satisfaction in accomplishing a list of activities and grow bored or even confused without specific goals. When we sit around waiting we end up fidgeting and looking for something to do. Even vacations can become physically exhausting because instead of resting, the effort to relax results in the pursuit of things to do. There is an underlying philosophy that life is short, time is not to be wasted, and the value of life is measured in what actions you have accomplished. But this isn’t God’s philosophy. Because while He has a clear Plan in mind for what He is going to do and how He will get it accomplished, He is never in a rush. He accomplishes His Will in His Own Way in His Own Perfect Timing. His Concern is for His relationship with us.

Consider that when Jesus was crucified, He fulfilled a host of prophecies, but His purpose was to be the Substitute Sacrifice for man’s sins so that we could be forgiven and reconciled to God. The purpose of the long list of prophecies Jesus fulfilled was to prove His Identity and assure us of The Truth of His Promises.

Spending time developing a relationship takes time and patience. There’s definite waiting involved. And giving a relationship priority can be a difficult thing for people who like to get things accomplished quickly. But it’s a lesson that God will teach us one way or another. It is our relationship with Him that must be the priority, and not all the things we hope to accomplish. He does not want us bogged down with and anxious about the things of this world. He wants our focus to be on Him. That is what’s behind His Promise in MATT 6:33 (New International Reader’s Version): But put God’s kingdom first. Do what he wants you to do. Then all those things will also be given to you. Putting God’s Kingdom first equates to making your relationship with Him top priority. And that involves studying His Word under a prepared Pastor Teacher.

In this study, we are going to examine the first part of JOHN 21. This Scripture covers what Jesus taught about waiting to His Disciples. It is also an important lesson for us. God works in His Timing and not ours. We must always remember that. We need to “Be still and wait patiently for the Lord to act.” (PSA 37:7 New International Reader’s Version) We are also to seek Him and His will and He will provide for us.

JOH 21:1 (New American Standard Bible) takes place at the Sea of Tiberias which is Israel's largest freshwater lake and is also known as Lake of Gennesaret, Lake Kinneret, and the Sea of Galilee. JOHN 21 starts this way: After these things Jesus [made himself visible] revealed Himself again to the disciples at the Sea of Tiberias… The words “after these things” refer to the post-resurrection events leading up to this point in time. Jesus Christ, who had been crucified, is risen from the dead. It was announced by the angel to Mary the mother of James and the other women who had gone to the tomb that first Resurrection morning. Jesus Himself announced it to Mary Magdalene just a short time later, and then later on that same day, Jesus revealed Himself to the two disciples on the road to Emmaus and then to all the disciples that had gathered together in a room in Jerusalem.

A week later, Jesus revealed Himself again to His disciples, but this time Thomas was also present, and he exclaimed, “My Lord and my God” as his skepticism was squelched by the evidence. It was The Lord Jesus Christ Himself standing before him. Though His Body had new qualities – like being able to enter a closed room – He was flesh and bone and not a spirit. He could be touched. He could eat, and He bore the scars of The Crucifixion. This is told in JOH 20:26-29 (New American Standard Bible): Eight days later His disciples were again inside, and Thomas was with them. Jesus came, the doors having been shut, and stood in their midst and said, “Peace be to you.” Then He said to Thomas, “Place your finger here, and see My hands; and take your hand and put it into My side; and do not continue in disbelief, but be a believer.” Thomas answered and said to Him, “My Lord and my God!” Jesus said to him, “Because you have seen Me, have you now believed? Blessed are they who did not see, and yet believed.”

We know only a little of what Jesus said to the disciples on these occasions. We know that He had explained the Old Testament prophecies about Himself to the two disciples while walking on the road to Emmaus. We also know that Jesus had calmed the disciples after appearing in their midst, and then He gently reproached them for their unbelief. After this, He commissioned and empowered them for their future ministry. This is taught in JOH 20:21-23 (New American Standard Bible): So Jesus said to them again, “Peace be to you; just as the Father has sent Me, I also send you.” And when He had said this, He breathed on them and said to them, “Receive the Holy Spirit. If you forgive the sins of any, their sins [have previously been forgiven] have been forgiven them; if you retain the sins of any, they have been retained.”

Jesus gave the group of disciples the teaching he had given the two on the road to Emmaus: “This is what I told you while I was still with you. Everything written about me in the Law of Moses, the Prophets and the Psalms must come true.” Then he opened their minds so they could understand the Scriptures. He told them, “This is what is written. The Messiah will suffer. He will rise from the dead on the third day. (LUK 24:44-46 New International Reader’s Version)

The disciples were witnesses of Jesus Christ’s Ministry, Death, and Resurrection, and He entrusted to them the task of taking His Message to all nations. Equipped by His Spirit, they would be His representatives in the world. This was a great responsibility, because as they preached The Gospel, people would either believe it and be saved, or reject it and suffer eternal judgment.

The message The Lord Jesus Christ shared with the disciples in JOH 20:21-23 lined up with what He had told them in the Upper Room Discourse after the last Passover meal. Here is some of what He told them on the night He was betrayed: But now I am going to the one who sent me. None of you asks me, ‘Where are you going?’ Instead, you are filled with sadness because I have said these things. But what I’m about to tell you is true. It is for your good that I am going away. Unless I go away, the Friend will not come to help you. But if I go, I will send him to you. When he comes, he will prove that the world’s people are guilty. He will prove their guilt concerning sin and godliness and judgment. The world is guilty as far as sin is concerned. That’s because people do not believe in me. The world is guilty as far as godliness is concerned. That’s because I am going to the Father, where you can’t see me anymore. The world is guilty as far as judgment is concerned. That’s because the devil, the prince of this world, has already been judged. “I have much more to say to you. It is more than you can handle right now. But when the Spirit of truth comes, he will guide you into all the truth. He will not speak on his own. He will speak only what he hears. And he will tell you what is still going to happen. He will bring me glory. That’s because what he receives from me he will show to you. Everything that belongs to the Father is mine. That is why I said what the Holy Spirit receives from me he will show to you. (JOH 16:5-15 New International Reader’s Version)