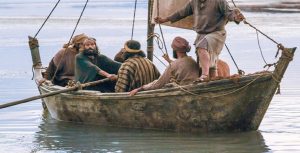 At the start of this study, we learned that an important directive concerning our relationship with The Lord Jesus Christ, and Our Heavenly Father, is given in PSA 37:7 (New International Reader’s Version): “Be still and wait patiently for the Lord to act.” We must seek Him and His Will and we must be patient and still along the way.

The disciples were given a message from Jesus through Mary Magdalene and the other Mary in MATT 28:9-10 (New International Reader’s Version) This message involved waiting: “Greetings!” he said. They came to him, took hold of his feet and worshiped him. Then Jesus said to them, “Don’t be afraid. Go and tell my brothers to go to Galilee. There they will see me.” Essentially, Our Lord’s Message to the disciples was to go there and wait for Him.

The disciples listened to the instructions and went to Galilee. We don’t know how long they waited there, but it could not have been for very long. They were still in Jerusalem a week after Jesus Christ’s Resurrection. Our Savior would ascend from Bethany 40 days after the resurrection. ACTS 1:3 (New International Reader’s Version) tells us: After his suffering and death, he appeared to them. In many ways he proved that he was alive. He appeared to them over a period of 40 days. During that time he spoke about God’s kingdom.

The Lord Jesus Christ also appeared more than once in Galilee. It would take at least a couple of days to travel each way to go from Jerusalem to Galilee and back. Therefore, the maximum time they could have waited would have been two weeks, but for people who need to do something, even a couple of days is a long time to wait. So what does Peter do? Well, we aren’t told why – but he goes back to what he did before getting to know Jesus Christ. We learn this in JOH 21:3 (New International Reader’s Version): “I’m going out to fish,” Simon Peter told them. They said, “We’ll go with you.” So they went out and got into the boat. That night they didn’t catch anything.

Now, Peter’s decision here is understandable to anyone who hates waiting. Goal-oriented people want to accomplish something. They’re totally uncomfortable waiting around. People who fidget while waiting want to be doing something. Patience was not one of Peter’s virtues. But there is a problem here that is more than just being fidgety. Note when they go out and how long they fish. If Peter just wanted to kill some time while waiting for The Lord Jesus Christ, he could have done some recreational fishing, but this was serious fishing. The other disciple also decided to go with him. This makes it a total of seven men who would be able to work the nets, and they work all night. Remember that Peter, James and John had been professional fishermen. This doesn’t give the appearance of being just a way to pass the time while waiting. It reads like The Lord Jesus Christ is gone and they’re going back to their old way of life.

It's possible they were getting low on funds, and this would be a way to bring in some money. There is nothing wrong about wanting to be productive and plan for the future. However, there is a problem when you’ve been given a new job and you return to the old one – especially when the new job is one of such great importance and given to you directly form Jesus Christ!

The Bible teaches us that Our Lord gave a Divine Mandate to the apostles. They were given both the authority and the power necessary to carry out their commission. Luke tells us that the apostles were given both power and authority: Jesus called together the 12 disciples. He gave them power and authority to drive out all demons and to heal sicknesses. Then he sent them out to announce God’s kingdom and to heal those who were sick. He told them, “Don’t take anything for the journey. Do not take a walking stick or a bag. Do not take any bread, money or extra clothes. When you are invited into a house, stay there until you leave town. Some people may not welcome you. If they don’t, leave their town and shake the dust off your feet. This will be a witness against the people living there.” So the 12 disciples left. They went from village to village. They announced the good news and healed people everywhere. (LUK 9:1-6 New International Reader’s Version)

The apostle’s Ministry was two-fold: they were to proclaim the Good News that The Kingdom of God was at hand; and they were to heal the sick, which included casting out demons and the raising of the dead: Heal those who are sick. Bring those who are dead back to life. Make those who have skin diseases ‘clean’ again. Drive out demons. You have received freely, so give freely. (MATT 10:8 New International Reader’s Version) Luke tells us that the disciples were given authority over all demons, which is important, for not all demons were of equal rank or power, and some were much more difficult to cast out, as is seen in the case of the disciples left behind during the transfiguration. At this early stage of their ministry, every demon was subject to them. So, there is little doubt that The Lord Jesus Christ made clear that they had a job to do!

We don’t know just what was in Peter’s mind that night when he decided to go fishing, but he should have remembered his fishing experience from three years earlier when he, Andrew, James and John had all been fishermen in partnership with each other. Jesus came along the shores of the Sea of Galilee to where they were fishing: Now as Jesus was walking by the Sea of Galilee, He saw two brothers, Simon, who was called Peter, and his brother Andrew, casting a net into the sea; for they were fishermen. And He said to them, “Follow Me, and I will make you fishers of people.” Immediately they left their nets and followed Him. Going on from there He saw two other brothers, James the son of Zebedee, and his brother John, in the boat with their father Zebedee, mending their nets; and He called them. Immediately they left the boat and their father, and followed Him. (MATT 4:18-22 New American Standard Bible) They left their fishing businesses behind and became The Lord Jesus Christ’s disciples. As we learned, He trained them to spread the Good News about The Kingdom of Heaven and to rely on God’s Provision for their needs. That should have been what they were doing while waiting by the Sea of Galilee, but Peter went back to his old life of fishing and the others joined him in his endeavor. They refused to wait. Jesus will teach them all a lesson about this, and it’s also a lesson for each of us too.

Early in the morning, Jesus stood on the shore. But the disciples did not realize that it was Jesus. He called out to them, “Friends, don’t you have any fish?” “No,” they answered. (JOH 21:4-5 New International Reader’s Version) It’s safe to say that it was a long night for these men. Remember that at least three of them had been professional fishermen. They knew where to fish and what to do. But they had failed terribly. They had not caught a thing and now it was daybreak. We’re not told why they could not recognize Jesus. They were only about a hundred yards from shore according to verse 8. That’s not a long distance.

What is surprising here, though, is not that they didn’t recognize Jesus, but rather their response to this stranger. Most fishermen do not mind being asked if they have caught anything, because if they have, it gives them a chance to talk about it and maybe brag a bit. A fisherman doesn’t like to admit to not catching anything, but they can still save their pride by appearing helpful and telling the person what bait was not working that day. But how do you react when the person fields the question in the negative to begin with? The question here is not, “Have you caught anything?” It is, “Don’t you have any fish?” And in the Greek it’s phrased in a way that expects a negative answer. Most people might find that a little irritating, but the disciples answer this stranger with a simple, “No.”

We can be sure there were many thoughts going through their minds at that moment, but the stranger’s question would have driven one thought in most deeply: “you men have failed.” That may be exactly what Jesus wanted them to feel at that moment. Think about it. They had returned to their old profession and were relying on their own wisdom and power. He had trained them to rely on God’s Wisdom and Power. He points out their failure as part of the lesson. You cannot be successful in God’s Kingdom if you do things by your own abilities. Nor can you be successful outside of His Plan for your life. And Jesus Christ had clearly laid out His Plan for the disciples. They were simply too impatient to wait for Him, as He had directed them to. Do you see how important it is to wait on The Lord Jesus Christ?

That is a lesson for all of us and it’s a hard lesson to learn. When we are not sure of what to do or things are not working out the way we had hoped, our tendency is to go back to our old ways and habits. We return to the patterns of life that we had before being called by God to live for Christ. These patterns are often sinful and can make a mess of things.